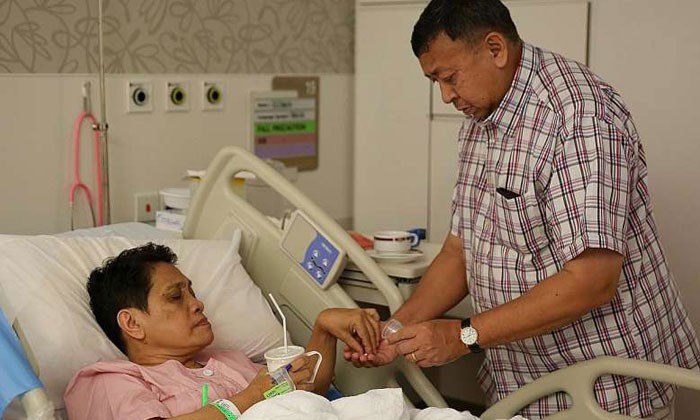 The bus jerked twice and came to a sudden stop.

The motion caused a woman passenger to fall onto Mr Peter Jansen, 64, who then tumbled backwards onto his wife who was the last to board the SBS Transit bus in East Coast Road.

As a result, his wife Elizabeth Jansen, 60, a marketing supervisor, who was standing next to the ticketing machine, fell on her back.

They would later discover that Mrs Jansen had a fractured pubic bone and would have to be hospitalised for six weeks, and would take another two months to fully recover.

The incident happened on Saturday around noon after the couple boarded bus service 14 at Katong Omega Apartment.

Mr Jansen, a retired airline cargo planner, told The Straits Times: "I shouted at the bus driver to stop but he didn't listen. Some passengers and I carried my wife to the seats at the front of the bus.

"I think he gave us a glance but... he continued driving while my wife was in terrible pain."

Despite repeated attempts to get the bus to stop so he could get help for his wife, Mr Jansen said the driver continued on and even allowed passengers to board the already crowded bus.

While he attended to his wife, two passengers had approached the bus driver to ask him to stop the bus but he did not, said Mr Jansen.

"So I went up to him and told him to stop and call an ambulance, but he said 'Uncle, give me chance'."

The driver eventually called the SBS Transit headquarters and an ambulance arrived to take Mrs Jansen to Changi General Hospital.

While his immediate concern was for his wife and payment of her medical bills, one question he had was about protocol in such incidents.

"It's important that bus drivers know how to react in such a situation. I don't know if he was following protocol, but he should at least have stopped the bus to help."

SBS Transit's senior vice-president for corporate communications Tammy Tan said: "Our focus is to assist Mrs Jansen as best as we can while we investigate the matter.

"We have been to the hospital to inquire about her well-being and will continue to keep close tabs on her. We hope she feels better soon."