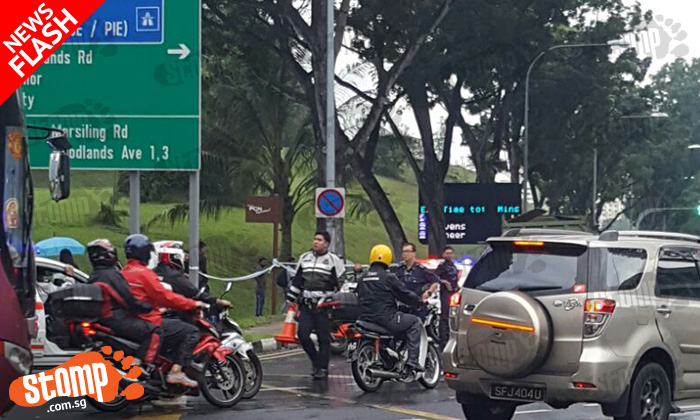 Stomper Frankie alerted the Stomp Team to an accident involving a motorcyclist and a tipper truck driver along Woodlands Centre at 6am this morning (Dec 1), which resulted in the death of the biker.

"I was on my way to work and as I was driving past, I saw that this (accident) happened.

"As I drove past, I saw that there was a canvas placed over the biker's body. It was then when I knew that he (biker) was dead."

"SCDF was alerted to an accident at the junction of Woodlands Centre and Admiralty Road at about 6am.

"One fire engine, one red rhino, and one ambulance were dispatched.

"A Chinese male was pronounced dead on scene by SCDF paramedics."

A Police spokesperson provided Stomp with the following statement:

"On 1 Dec, 2016, at 5.58am, the Police were alerted to an accident involving a tipper truck and a motorcycle along Woodlands Centre towards Woodlands Avenue 3.

"The 51-year-old male motorcyclist was pronounced dead by paramedics at scene.

Related Stories
One sent to hospital after lorry crane hits road divider at Woodlands -- blocking buses, forcing passengers to alight and walk
Ex-national athlete studying at NTU dies in Slovakia after getting hit by falling tree during storm
Biker killed after being run over when trying to ride between 2 trailers at Jurong Town Hall Road
accident
dead
tragic
woodlands
tipper truck