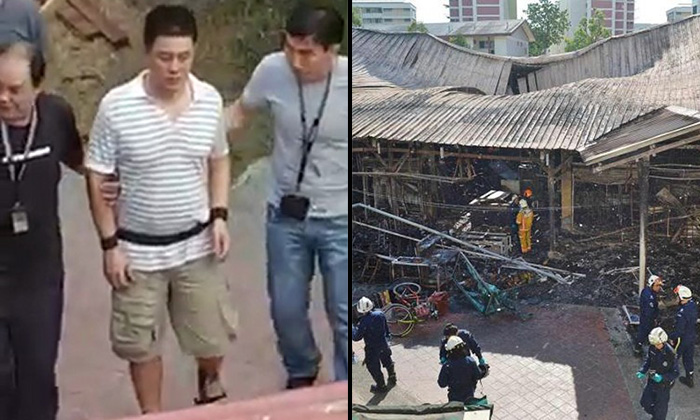 A Singaporean man was charged in court today (Oct 15) with causing a fire that destroyed two coffee shops and a wet market in Jurong West.

Lim Ying Siang, 41, allegedly committed the mischief by setting fire to styrofoam boxes at the market at Block 493, Jurong West Street 41, on Tue (Oct 11) at 2.42am, reports The Straits Times.

Lim, who is charged with the offence of committing mischief by fire with the intent to destroy a building, could be jailed for life, or imprisoned for up to 10 years and fined.

He was earlier arrested for his suspected involvement in the fire, reports AsiaOne.

A video posted by Facebook user Kevin Van Persie shows Lim being brought to the scene of crime for investigations.

In a statement on Friday (Oct 14), police say they were alerted to the fire at Blk 493, Jurong West Street 41.

Through extensive ground enquiries and follow-up investigations by officers from the Criminal Investigation Department and Jurong Division, the suspect was identified and arrested on October 13, said the statement.

About 300 residents from the surrounding blocks had to be evacuated due to the fire, affecting the livelihoods of dozens of stallholders.

Jurong GRC MP Ang Wei Neng said on Thursday night that a new market "may take a year-plus to build",

"This is a serious crime which had resulted in extensive damage to property and loss of income to innocent victims," said Commander of Jurong Division Koh Wei Keong.

"The police have zero tolerance for such lawless acts and will ensure that perpetrators are dealt with to the fullest extent of the law."