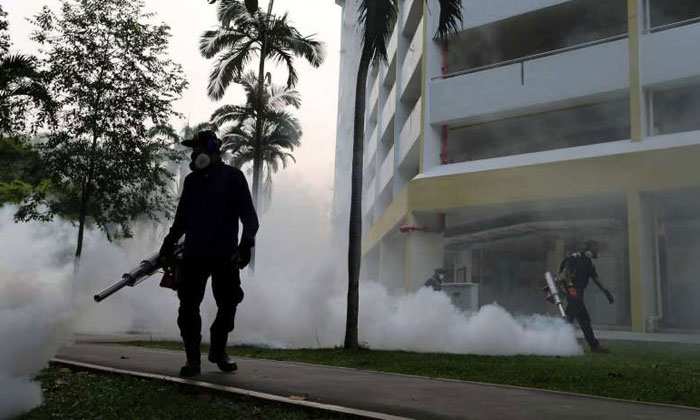 The Ministry of Health (MOH) has confirmed 41 cases of locally transmitted Zika, all of whom were residents or workers in the Aljunied Crescent and Sims Drive area. They include 36 foreign construction workers.

This is out of 124 people – including 118 construction workers – who have been tested, most of them on Aug 27. In all, 78 have tested negative and the remaining five cases are still pending, MOH and the National Environment Agency announced in a joint press conference on Sunday (Aug 28).

None of the cases are known to have travelled to Zika-affected areas recently, suggesting local transmission. These are in contrast to Singapore's first Zika case in May, a 48-year-old man who had visited Brazil, one of the Zika-affected countries.

The latest announcement follows the one on Saturday (Aug 27) of Singapore's first locally transmitted case of the virus - a Malaysian woman. She is the only confirmed female case in Singapore.

Of the 41 cases, 36 were detected through active testing. In all, 34 cases have fully recovered. The remaining seven are still symptomatic and recovering at Tan Tock Seng Hospital.

So far, the cases appear to be localised within the Aljunied Crescent and Sims Drive cluster, said MOH.

However, authorities have identified "other areas of concern outside of cluster" where some of the victims live or work. These are Khatib Camp, where one of the victims is a full-time national serviceman; Sembawang Drive; Kranji Road; Joo Chiat Place; Senoko South Road; Toh Guan Road East; and Lorong 101 Changi.

The NEA started intensified vector control operations - targeting Aedes mosquitoes which spread the virus - and will continue for 14 days, with surveillance of the situation for another 21 days afterwards. These include misting, fogging and increasing the frequency of flushing and oiling drains to prevent mosquito breeding.

The Zika virus has mild effects on most people but it can be fatal for unborn children. Pregnant women who get infected may give birth to babies with small heads, a condition called microcephaly, and other brain defects.

About four in five people infected by Zika will not show symptoms. For those who do, the symptoms include viral fever, skin rashes, body aches and headache.

On Aug 22, a GP clinic in the area informed authorities of an unusual increase in viral fever. The next day, MOH went down and told GPs to refer new cases to the Communicable Diseases Centre, and began tracing past cases. At that point in time, authorities suspected a mild viral infection but not Zika specifically.

On Aug 27, more than 200 officers were activated to conduct intensified control operations.