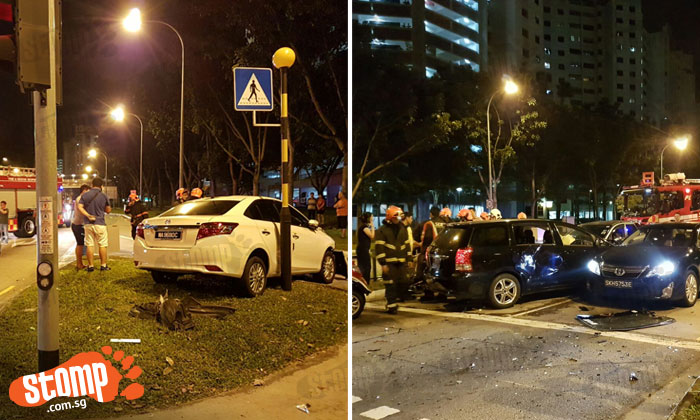 It is a cooling night and you decide to look out and enjoy the breeze along your corridor when suddenly, you hear a loud 'BANG'.

Shaken and curious, you quickly look over -- only to realise a major accident has taken place.

This was exactly what Stomper William had experienced at around 11.45pm last night (Jan 16) when an accident involving four cars took place near his block -- at the traffic junction of SengKang East Way.

"I was outside my house when I heard the commotion."

As seen from the images sent from another passing Stomper, a white car is seen to have crashed badly onto the road birch next to the zebra crossing -- and another car black car is seen to have turned into the wrong direction, hitting two other cars that were waiting to turn right at the junction.

Stomper William had reached to call for the police when he saw the accident, but both the police and Singapore Civil Defence Force had arrived at the scene just then.

According to William, the SCDF had to force open the door of the white car to get the passengers out.

It is unclear what caused the accident, but Stomp has contacted the relevant authorities for more details.

"On 16th January at around 11.22pm the police were alerted to an accident involving four cars and one motorcycle at the junction of SengKang East Way and SengKang East Drive.

"The SCDF was alerted to the incident at 11.23pm and dispatched one fire engine, one red rhino, one fire bike and one ambulance.