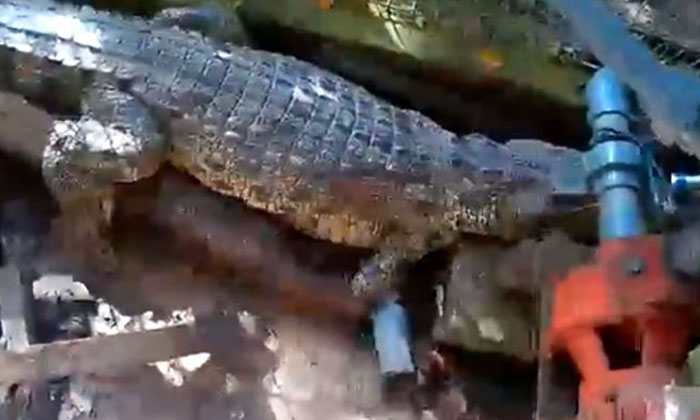 This scaly wild creature found its way back to Sungei Buloh Wetland Reserve, with the help of three men and a woman.

The crocodile got stuck after it ventured into the drain of a fish farm at Lim Chu Kang last Friday.

The full-grown crocodile, named Diley by its rescuers from animal welfare group Acres, was about 3m long and weighed about 70kg.

Its sex is unknown. The team did not have time to check because it wanted to release the reptile into the wild as fast as possible.

Mr Kalai Balakrishnan, 30, wildlife group director of Animal Concerns Research and Education Society (Acres), told The New Paper that Diley was the first crocodile they have caught this year.

Workers of the fish farm had approached Acres for help after spotting the creature at about 8.30am.

It took four people nearly an hour to catch the reptile and release it back into its natural habitat.

Mr Kalai said most of the time taken was spent planning how to restrain it.

First, they threw a towel over the crocodile to cover its eyes and avoid giving it too much stress.

After the crocodile was caught, it was passed through a gap in the fence and released back to the reserve.

Diley is an estuarine (saltwater) crocodile, a species which is known to swim in the Straits of Johor and to feed and rest in mangroves, freshwater ponds and lakes.

The species has been spotted at Sungei Buloh Wetland Reserve and the northern coasts of Singapore.

Mr Kalai, who has worked in Acres for six years, said it is the third crocodile he has rescued

He said: "These are endangered species that need to be protected. They will attack only if they are provoked."

An advisory on the National Parks website states that the creatures are usually found in the water or at the mudflats away from visitor routes.

There are also warning signs and notices posted at areas where they are most often seen.

The public should to stay on visitor routes and not venture off the designated paths.

Mr Ben Lee, founder of conservation group Nature Trekker, estimates that the numbers of estuarine crocodiles in Sungei Buloh has increased three-fold over the past 10 years.

He declined to give exact figures.

The nature lover, who has been visiting the nature reserve at least once a week for the past 20 years, said he once spotted a 4m-long "monster".

He said: "Sungei Buloh is a haven for bird watching, but some people have come here just to look out for crocodiles.

"There is a mix of shock and fascination whenever they spot a crocodile from the boardwalk."

These are endangered species that need to be protected. They will attack only if  they are provoked.

Crocodiles in the news

The carcass of a 400kg estuarine crocodile was found at Kranji Reservoir with a metal rod in its eye and a large fishing hook lodged in its mouth.

The 3.6m-long reptile, nicknamed Barney by anglers, was believed to be one of the largest wild specimens in Singapore.

PUB, the national water agency, and the Agri-Food and Veterinary Authority said poachers could have been responsible for the crocodile's death.

A teacher and a group of seven-year-old schoolchildren on a field trip spotted a crocodile crossing the main footpath at Sungei Buloh Wetland Reserve. It was just 20m from the children.

The Ministry of Education suspended all water-based activities at its Jalan Bahtera Adventure Centre in Lim Chu Kang after the owner of a fish farm reported spotting a crocodile in nearby waters.