38-year-old topless woman causes traffic jam on Nicoll Highway: She 'was carrying her bra in her right hand' 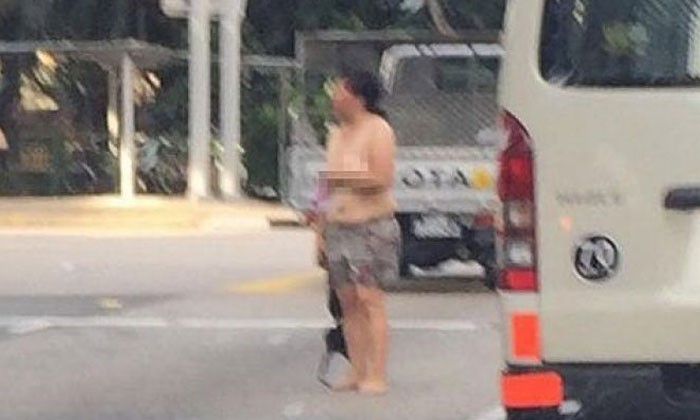 She was spotted walking topless in the middle of the busy road.

A witness, who wanted to be known only as Madam Yu, 51, told The New Paper that the woman caused a traffic jam along Nicoll Highway towards Mountbatten Road at around 5.45pm yesterday.

The senior personal assistant, who was in a car driven by her husband, said: "The woman was carrying her bra in her right hand. She was strolling calmly towards the city near The South Beach hotel. Many vehicles swerved to avoid her."

TNP understands that there was no accident during the incident, and the woman is a China national.

Responding to queries from TNP, police said they received a call about the woman at around 5.40pm.

A spokesman added that officers arrived at the scene and arrested the 38-year-old under the Mental Health Act.

Madam Yu, who has two adult children, said her husband had picked her up near her workplace at Clarke Quay Central shopping mall at around 5.30pm.

They were heading home to Tampines when they were caught in a traffic jam near Raffles City shopping centre.

She said it usually takes three minutes to travel about 1km from Raffles City to Nicoll Highway. But due to the jam, the journey took 10 minutes.

Madam Yu said: "I was shocked when I later spotted the topless woman. I could have stepped out to help her but my husband could not stop the car."

Related Stories
Man walks outside Tiong Bahru Plaza with butt exposed in hospital gown -- then goes fully nude in public
Naked woman walks on road at Upper Boon Keng -- as men desperately try to prevent her from getting knocked down by vehicles
Sick trend of women posing naked at public places in S'pore continues
'Chinese tourists' slammed for frolicking naked on Thai beach -- but they turn out to be Japanese
More About:
inappropriate
nude