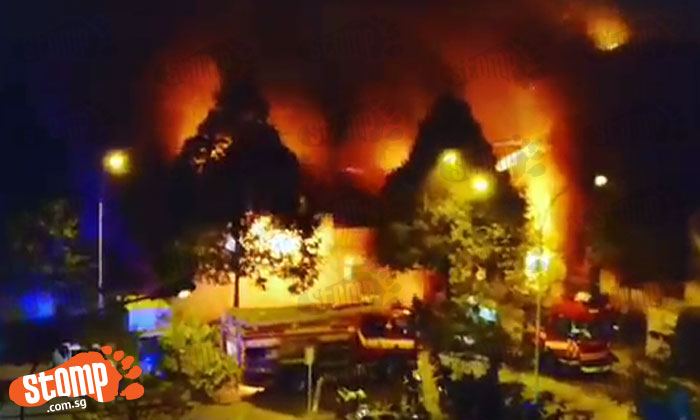 Stomper Nura, who lives at Block 492 was one of the residents in the area who were evacuated by Singapore Civil Defence (SCDF) officers and shared videos of the incident with Stomp via Facebook.

Nura was woken up by her neighbours at close to 3am when she saw the fire from her flat's window.

"We didn't know what to do until an officer came up and told us to evacuate our homes," said the Stomper.

She then went down with her neighbours to a safe area as they watched the SCDF officers extinguish the flames.

"Within 20 to 30 minutes, the fire had spread from one side of the coffee shop to the other.

"Fortunately, it did not reach my block as the firefighters had managed to cool it before it spread."

Nura said that she waited an hour before she returned to her flat at 4am this morning.

Stompers Valerie and Choms also sent in more photos and a video of the incident.

"The fire which involved a coffee shop and wet market at Blk 493, Jurong West St 41 has been extinguished.

"SCDF was alerted to the raging fire at about 2:45am and dispatched 3 Fire Engines, 4 Red Rhinos, 7 support vehicles and 4 ambulances.

"Upon arrival, the wet market and coffee shop of Blk 493 were completely engulfed in flames.

"SCDF firefighters quickly surrounded the fire with a total of 6 water jets and deployed 1 aerial monitor from a Combined Platform Ladder.

"At the height of the fire, the roof of the wet market collapsed and the exterior side wall of a coffee shop at Blk 494, which was directly facing the raging blaze, sustained fire damage.

"By 4:15 am, the fire was extinguished and *damping down operations are currently in progress

"About 300 residents from the surrounding blocks were evacuated by police and SCDF officers. Residents are now progressively being allowed to return to their homes.

"One of the residents, a lady in her 60s, while evacuating, experienced difficulty in breathing and was conveyed to Ng Teng Fong General Hospital. There were no other reported injuries.

"SCDF is investigating the cause of the fire.

"*“Damping Down” is a term popularly used by SCDF firefighters to describe the application of water to wet burnt surfaces immediately after the fire is put out. This is to prevent any potential rekindle of fire from the hot burnt surfaces."

Related Stories
15 people evacuated after fire breaks out at Orchard Towers
Fire breaks out at Balam Road flat that houses family of 8
Toa Payoh resident thought she forgot to turn off gas -- but turns out to be raging fire at coffeeshop downstairs
More About:
Fire at Block 493 Jurong West St 41 coffee shop
fire
scdf