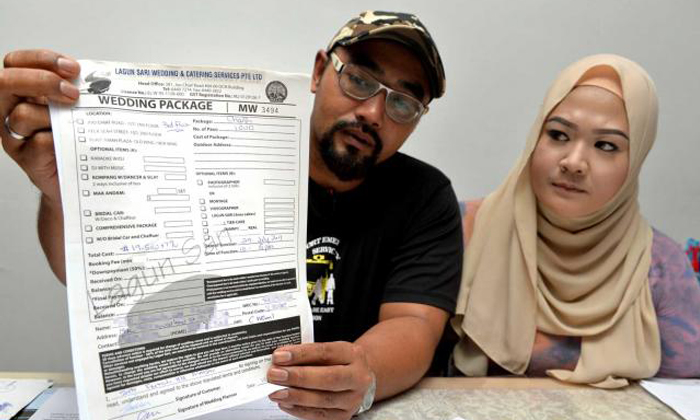 A wedding planner from a respected and renowned wedding services company has been sacked after he was accused of cheating his clients.

The New Paper spoke to three women who alleged that they were scammed by Mr Sunato Zaidi, who worked for Lagun Sari Wedding and Catering Services, a popular Joo Chiat-based business that offers all-in-one venue, catering and decoration services.

Ms Fazilah claimed that Mr Sunato had pocketed more than $9,000 of her savings.

The nurse told TNP: "He was nice and approachable. We trusted and believed him."

Testimonials on the Lagun Sari website portray Mr Sunato as a responsible and efficient wedding planner.

Ms Fazilah and her fiance, Mr Muhammad Danial, 28, initially had no problems with Mr Sunato being assigned as their wedding planner.

However, they realised something was amiss when Lagun Sari kept asking them for payment, even though they had already made payments to Mr Sunato.

In Saturday's Berita Harian (BH), Lagun Sari published a notice that said Mr Sunato had been terminated and was not allowed to make any financial transactions on behalf of it.

When Ms Fazilah saw the notice on Saturday morning, she immediately called Lagun Sari for an explanation, but was told that it could not do anything as the receipts she had been given were fake.

Ms Fazilah made a police report against Mr Sunato that day and filed a report against him and Lagun Sari to the Consumers Association of Singapore (Case).

She said Lagun Sari agreed on Thursday to fully compensate the $11,000 that was paid to Mr Sunato by Ms Fazilah and her fiance, so the couple will go ahead with Lagun Sari's services.

If the company had not agreed to fully compensate the amount she lost, she said she would have been forced to look for another venue and caterer.

The same goes for customer relations officer Nadzirah Mahmood, 27, who said she was cheated out of $5,000 over three transactions with Mr Sunato for her wedding next year.

While the company initially said they were not going to reimburse her, Ms Nadzirah said Lagun Sari yesterday agreed to compensate her the $5,000.

Ms Nadzirah and her fiance have decided to stick with Lagun Sari for their March 12 wedding next year.

After meeting with their newly-assigned wedding planner yesterday, she said: "They are doing their best to make up for what is lost and agreed to honour the promises Mr Sunato had made to us."

Interior designer Siti Fadilah, 26, also realised something was wrong when she saw the notice in BH on Saturday .

Ms Fadilah also believes she was issued fake receipts by Mr Sunato, and lost around $5,000.

She told TNP: "I had no idea the receipts were fake. The receipts all had Mr Sunato's signature and the company stamp."

Ms Fadilah said: "Initially, Lagun Sari said it wouldn't refund us, but after I met them on Wednesday, it said it would absorb the losses if we continued our wedding with it."

She said: "Everyone knows Lagun Sari and Mr Sunato, they're quite reputable. I just never expected something like this would have happened."

Three people have tried to complain to the Consumers Association of Singapore (Case) about Lagun Sari Wedding and Catering Services from Tuesday to yesterday.

Case offered advice on the options the consumers could take and it said in its e-mail reply to The New Paper that they did not file their complaint with the consumer body.

Case executive director Seah Seng Choon: "Consumers should consider purchasing wedding insurance and ensure that the policy covers all important aspects of their wedding, such as damage to the wedding attire, delay in the banquet and even cancellation or postponement of the wedding event.

"A wedding is a once-in-a-lifetime event and it is always better to be safe than sorry."

He said: "To recover the monies, the victim will need to initiate civil proceedings. This, however, isn't a guarantee that monies can be recovered and may result in a paper judgment being obtained."

Mr Singh, who is the head of Criminal Practice at Eugene Thuraisingam LLP, also mentioned that the company itself should be added as a co-defendant, as the contract would have been signed with the company and not the individual.