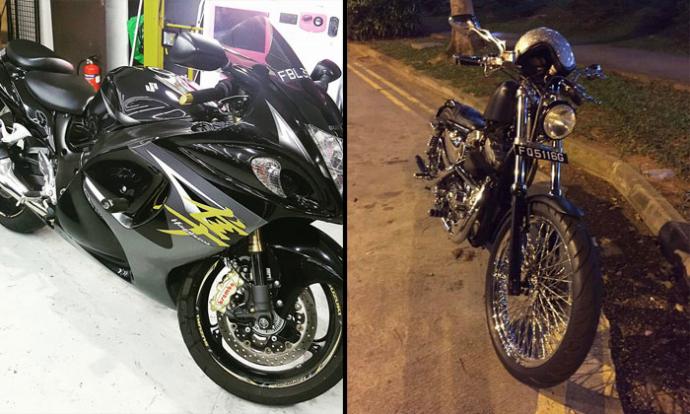 Two men aged 62 and 50 years old have been arrested last night (Nov 23) in connection with the theft of three motorcycles in Woodlands on Nov 20, 21 and 22.

All three motorcycles were stolen from within the Woodlands area.

Police has issued a statement on the arrest in a news release:

The Police have arrested two men, aged 62 and 50 years old, for their suspected involvement in several cases of Theft of Motor Vehicle.

2  Between 22 and 23 November 2016, the Police received three reports of thefts of large capacity motorcycles in the Woodlands public housing estate.

3   A team of officers from Jurong Division was immediately tasked to look into the series of cases. Through extensive investigations and ground enquiries, and the assistance of officers from Bedok Division, the identities of the two men were established. They were arrested separately along Short Street and Ang Mo Kio Ave 3 on the evening of 23 November 2016. Two of the motorcycles, partially dismantled, were recovered at Short Street. Preliminary investigations suggest that the duo may be involved in other cases of similar nature in the Woodlands and Bedok areas.

4  The suspects will be charged in Court on 24 November 2016 with the offence of Theft of Motor Vehicle with Common Intention under Section 379A, read with Section 34 of the Penal Code, Chapter 224. If convicted, each faces an imprisonment term which may extend up to 7 years, and shall also be liable to fine.