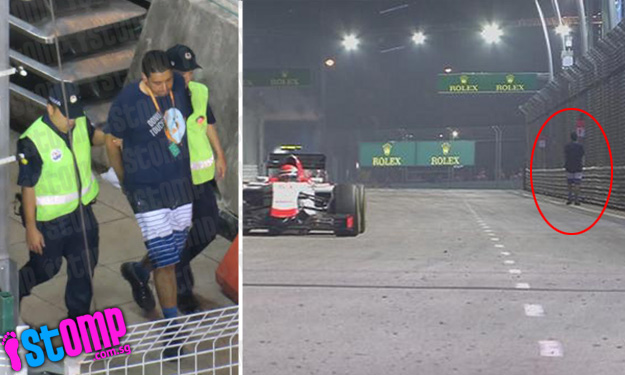 A 27-year-old man has been arrested over invading the track while the Singapore Grand Prix was still ongoing.

Stomper Yoon sent in a photograph he took showing the man being taken away by two policemen.

According to The Straits Times, the International Automobile Federation (FIA), Formula One's governing body, said the 27-year-old, who was clad casually in T-shirt and shorts, was "assisting police with investigations".

FIA also stated that then man  "went on to the track near Turn 13, triggering the deployment of the safety car".

The German driver continued after the race:

"Maybe next season, (the organisers) can block the grandstand. Fortunately, nothing happened to the drivers and to him."

Said the Stomper who took the photo:

"We saw the tresspassing incident on TV.

"We then saw this person being accompanied by security personnel from Fullerton Hotel.

"I took the photo with my zoom camera."