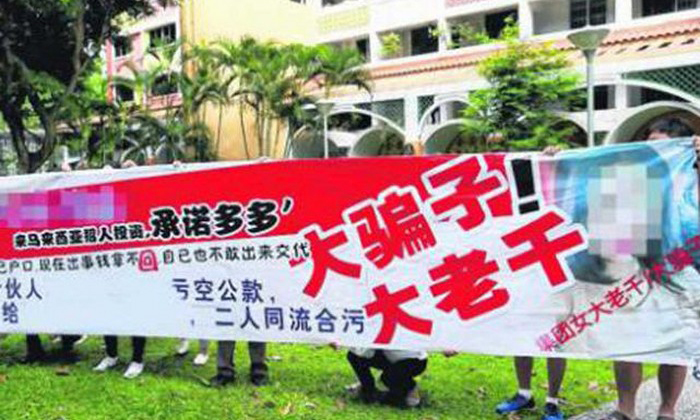 A group of angry Malaysian investors, claiming to be victims of an alleged investment scam, lodged police reports in Singapore on Sunday afternoon (July 3).

The group, which comprised 24 investors who were mostly from Johor Bahru and Malacca, alleged that they were cheated by a Singapore-based investment company, and wanted to recoup US$100,000 (S$135,000) that was owed to them.

They then went to a nearby field at the bottom of a block of flats at Neil Road, where they unfurled a banner which bore the photos of a man and woman who are apparently the owners of the investment company.

The banner referred to the pair as "liars" and "conmen", and also had the message: "return the money earned with our blood and sweat to us!"

One of the investors, a 36-year-old used car salesperson, told Shin Min that more than 100,000 Malaysians had made investments with the commpany, and may have suffered losses amounting to US$20 million.

She told reporters that most of the people in the group had started investing their money with the company in August 2014.

"At the start, everything seemed normal, and we could go online to check the returns on our investments every day. Initially it seemed like a profitable business, as we seemed to see profits almost every day and could earn interest of about 5 per cent in a month," she said.

It was not until April or May last year when problems started to arise.

"The company's owner suddenly wanted to transfer all the investment funds into another company. But after the change, we realised that there was no longer transactions every day and we also could no longer check on our returns daily," the salesperson explained.

When some investors started to raise questions and began requesting to withdraw from the investment company, the owner became evasive and begun making excuses.

"When people asked for their money, the boss told us that they would need to wait for some time before they could collect their funds because they were being transferred to the new company.

"The owner then told us that he was not able to allow investors to make transactions every day as he was being investigated by police in Singapore and money laundering companies from Hong Kong," she told Shin Min.

Eventually, the company's owner told investors that they would be able to retrieve their funds from a bank in the Philippines. But investors who tried to do so were unsuccessful.

The salesperson added that the group had also lodged police reports in Malaysia before making them in Singapore.

According to Shin Min, police confirmed that reports had been lodged and said that investigations were ongoing.

Checks on the Monetary Authority of Singapore (MAS) website also revealed that the investment company in question was not recognised by the authorities.