Is he local DJ's son? McLaren driver, 21, arrested after apparently driving without licence and evading roadblock in Joo Chiat 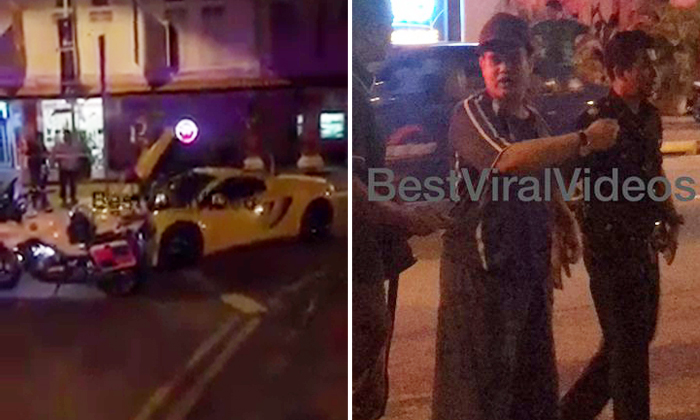 A 21-year-old driver of a flashy McLaren was arrested along Lorong 101 Changi in Joo Chiat last night (Dec 12).

Stomp understands that he had tried to evade a roadblock and was driving without a licence.

"In response to media queries, the Police confirm that a roadblock was conducted along Lorong 101 Changi.

Photos and a video taken at the scene have been circulating online after being uploaded by Best Viral Videos on Facebook, which a Stomper alerted us to.

In the clip, a bespectacled bystander can be seen narrating what happened. He and a friend said that they were doing a "Facebook Live" recording and "being kaypoh".

He added, "Ah, you see. This car ah, in Joo Chiat ah, anyhow fly, you know. The Traffic Police ah, three of them, chase this man, you know."

The narrator dentified a man who was wearing a cap as the sports car driver and repeatedly remarked, "Siao liao".

The video also shows the driver talking to a police officer, who patted him down.

According to the narrator, the driver was then handcuffed and believed to have been taken away in a police car.

The Facebook post also alleged that the driver is the son of a local deejay. However, his identity cannot be confirmed.

According to Stomper Adwin, the vehicle the man was driving is a McLaren 12C Spider, which is a convertible version of the MP4-12C with a retractable hardtop.

Adwin said that the car, which has a power of 626 HP and can accelerate from 0-100kmh in three seconds, costs at least $1.2 million with a Certificate of Entitlement (COE).