20 rats caught within one hour in Jurong West Market 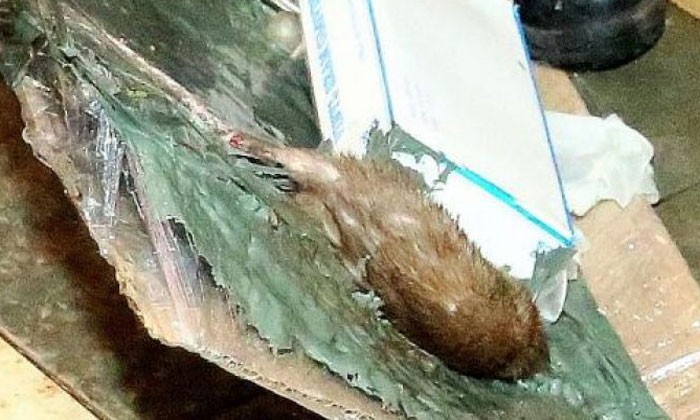 An aggressive "raid" on rats is being carried out at the Jurong West Street 52 wet market and food centre.

The "war zone" at Block 505, was cordoned off by pest control officers on Sunday night, drawing curious onlookers.

Chinese newspaper Lianhe Wanbao reported that the operation, which involved about 30 people, started at 7pm on Sunday and will last till tomorrow.

About 20 rodents were caught in just an hour.

Stall owners said the rat-control exercise, the largest they have seen, is timely as the infestation had worsened in recent months.

Madam Cheong Yuet Chun, 68, who has been running a drinks stall at the market for 30 years, saw a dead rat trapped under a metal cupboard in her stall several months ago.

She said in Mandarin: "It must have fallen from the roof.

"We saw rats running around above our stalls at night.

"The smell was terrible. I'm glad they are taking tough action now."

When The New Paper visited the market yesterday evening, more than 15 pest control officers from Star Pest Control were at the scene.

Several stall owners were also there to open their stalls for the officers to check.

In just 15 minutes, we spotted four large rats scurrying across the floor.

A National Environment Agency (NEA) spokesman said it had received 18 reports of rat sighting within the market and hawker centre this year.

During NEA's regular inspections, its officers saw instances of poor refuse management and clutter in common areas and the bin centre – places where rats can gather.

Last month, six burrows were detected near Blocks 505 to 507 of Jurong West Street 52.

Mr Ang Wei Neng, chairman of the Jurong-Clementi Town Council, told TNP that the exercise did not arise from feedback or complaints from residents, but was part of a routine maintenance programme to improve the overall hygiene of the markets and food centres.

"We carry out pest-control treatment (rodents and cockroaches) during the quarterly market washing," he said.

Mr Ang, who is also MP for Jurong GRC, said they managed to encourage the cooked food and market stall holders to engage the same pest control company to conduct treatments within their stalls.

"The stall holders are taking this exercise seriously as they want to present a clean environment to their customers," he said.

A stall owner who wanted to be known only as Madam Yap, 50, said that her rat trap nabs at least one rodent a week.

Madam Yap, who runs a stall selling flowers and another selling noodles, added: "It's impossible to eliminate all the rats, but we all have a part to play in keeping our stalls clean and to try catching the rats.

"We are worried about getting fined and it might not even be our fault because the rats run around.

"If they give us rewards for catching rats – dead or alive – I'm sure it will be more effective than these professional pest control exercises."

About 180 rats were caught over five days near Bukit Batok MRT station in December 2014.

The situation was believed to be caused by animal feeders who left food for stray dogs nearby.

A video showing rats scurrying around a slope near the MRT station went viral.

It took pest controllers three weeks to wipe out the infestation.

More than 50 rats were caught in an extermination exercise in Bedok South after residents reported a rise in rodent numbers across blocks 69 to 72 in April last year.

The National Environment Agency found 16 burrows at Block 70 and rat droppings in a bin centre and two food outlets, which were later given warnings.