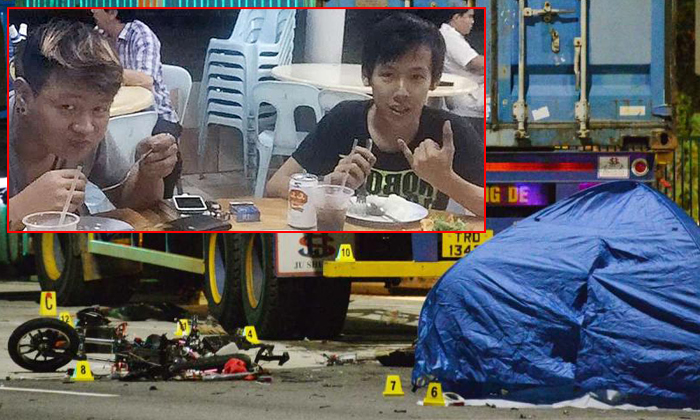 Three electric bicycle riders were involved in an accident with a container truck on Oct 27, resulting in two of their deaths and one of them to be injured.

Stompers Adrian, Marcus, Riduwan and Valerie had alerted Stomp to the incident, which took place at the junction of Pandan Crescent on the West Coast Highway, at 11.59pm.

According to The Straits Times, the three friends had intended to ride from Jurong to Telok Blangah when they were hit by the trailer.

Mr Ang Yee Fong, 25, was pronounced dead on the scene. He will be cremated today (Oct 29).

Mr Ong Zi Quan, 18, who was taken to the National University Hospital (NUH), later died of his injuries. He was cremated yesterday (Oct 28).

Mr Marcus Loke, 17, was taken to NUH with leg injuries. He is currently in the general ward at the hospital, and is in stable condition.

The Straits Times understands that Mr Loke was riding in front, Mr Ong was in the middle and Mr Ang rode at the back.

A Police spokesperson told Stomp that the 34-year-old trailer driver was arrested for causing death by negligent act and that investigations are ongoing.