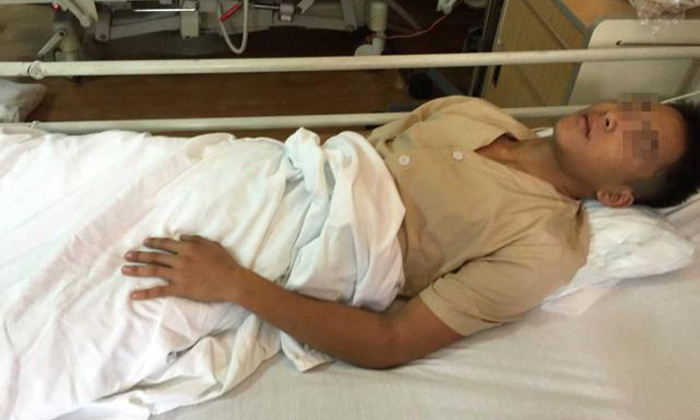 They were good friends and became close after joining a lion dance troupe about a year ago.

They often met up to ride their power-assisted bicycles, or e-bikes, together.

Sadly, they rode as a group for the last time on Thursday night.

Marcus Loke Teck Soon, 17, Mr Ong Zi Quan, 18 and Mr Ang Yee Fong, 25, were riding their bikes near the junction of Pandan Crescent along West Coast Highway shortly before midnight when a trailer hit them from behind.

Marcus is the only one to survive what is believed to be the worst traffic accident involving e-bikes to date.

Speaking from his bed at the National University Hospital (NUH) yesterday morning, he told The New Paper: "I'm very lucky to survive. But I'm very sad to lose my friends."

The police told TNP that officers were alerted about the accident at around 11.55pm on Thursday.

Mr Ang was pronounced dead at the scene. Marcus and Mr Ong were rushed to NUH, where the latter died.

The 34-year-old trailer driver was arrested for causing death by negligence, said police.

Marcus, who is jobless, was alert and calm when TNP visited him in NUH yesterday.

He survived the crash with several scratches, body pain and an injured leg.

Recounting what happened, Marcus said they started their ride in Jurong at around 10.30pm and were on their way to his grandmother's home in Telok Blangah when the accident occurred.

He was leading the way with Mr Ong directly behind him. Mr Ang was riding at the back.

He said: "We were riding at the extreme left side of the road within the double yellow lines, when the trailer hit us. My friends were dragged on the road and I fell off my bike."

He said he managed to painfully pick himself off the road afterwards, thankful to be alive.

An ambulance arrived soon after and took him to NUH.

A nearby resident, Mr Naing Htay, 42, a marine service engineer, told TNP later that he heard a crash, followed by the screeching sound of brakes and a man screaming in pain.

The Myanmar national, who saw the crash from the fourth storey of Block 715, Clementi West Street 2, said: "I was standing at the windows and someone shouted and asked me to call the ambulance.

"I quickly ran down the stairs and I saw someone trapped under the trailer, who was still alive. There was another body lying in the middle of the road in a pool of blood. His head was badly wounded."

Mr Ong's sister later told reporters that her brother was to be enlisted in national service on Monday.

At around 2pm, his body was taken to Jin Lu Funeral Service at Block 89, Geylang Bahru, for the final rites

More than 50 friends and relatives attended Mr Ang's wake, which was held at a funeral parlour at Sin Ming Drive yesterday.

His parents declined to speak to the media.

Mr Ang, who was known as Boy Boy to his friends, had recently completed his national service and was working at a bar, said his friends.

A close friend, Mr Claus Lee, 19, said he tried to warn Mr Ang from riding an e-bike because he knew of two friends who had been in accidents.

They had gone on a spin on their e-bikes with their friends on two occasions.

Mr Lee said: "He wasn't worried (about getting into an accident) because he was a safe rider. I sold off two of my e-bikes two months ago because I was worried that I would be the next one to get into an accident. I didn't think it would happen to my friend."

Mr Ang will be cremated today.