2 killed after truck runs over them at Mandai worksite: Video shows workers scrambling to help them 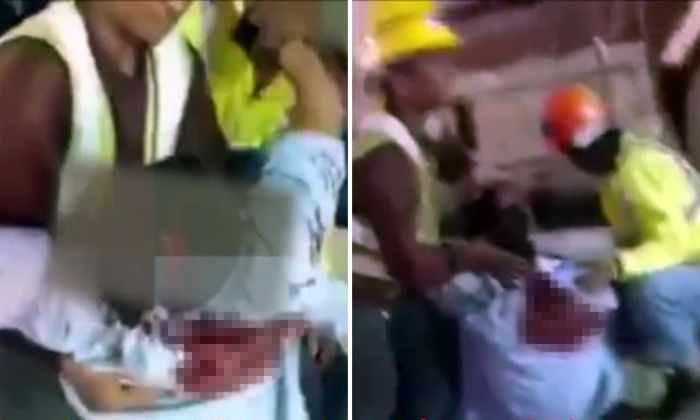 Two workers died after they were run over by a reversing tipper truck at a Mandai construction site on Thursday (Nov 3).

A heart-punding video posted on SBS - Sure Boh Singapore shows other workers scrambling to help the two who were run over.

They are seen trying to lift the victims, and bringing water to clean their wounds.

One is even seen trying to tie a tourniquet to stop the bleeding from one victim's wound.

The Bangladeshi nationals, aged 36 and 47, were said to have been napping on the ground when the incident happened at the Thomson-East Coast Line Mandai Depot construction site.

The younger man was pronounced dead at the scene, reports The Straits Times.

The 47-year-old died in Khoo Teck Puat Hospital, after he was taken there unconscious, said the Singapore Civil Defence Force (SCDF).

An SCDF spokesman said it was alerted to the accident at 20, Lorong Lada Hitam at 1.15pm.

A worker from the same site, who wanted to remain anonymous, said: "They were both sleeping on the ground after lunch. But they were not supposed to rest there. The lorry (driver) didn't see them and reversed into them."

Both were employees of Gammon, a contractor responsible for fire protection and electrical works, said the Land Transport Authority (LTA), which commissioned the construction.

The Straits Times understands that the workers and the lorry driver were from separate subcontracted companies.

The 54-year-old driver has been arrested for allegedly causing death by a negligent act, said the police.

When The Straits Times visited the site, there was no sign an accident had taken place, although workers at different parts of the large site were aware of it.

The LTA said it would work with Gammon and Jurong Primewide, the main contractor, to assist the families of the dead workers.

An LTA spokesman said it was "deeply saddened" by the fatal accident.

The Ministry of Manpower (MOM) and the police are investigating the incident.

This is the second time a fatal incident has been reported at the same worksite this year.

In May, construction worker Riyade Hussain, 23, died after he was pinned under a metal beam that had fallen from a trailer.

Mandai Depot is being built for the Thomson-East Coast MRT Line and is expected to be ready in 2019.

It will also house a bus depot.

As of September this year, a total of 54 workers had died on the job - 20 in construction - the MOM said in a report on workplace safety. In the whole of last year, 66 had died.

The numbers led Manpower Minister Lim Swee Say to warn that the fatality rate could hit 2.2 per 100,000 workers this year, up from 1.9 last year.

"It's not the first time we've had an incident involving a vehicle.

Many of these incidents are preventable, so every single person involved should embrace safety as a culture," he said.