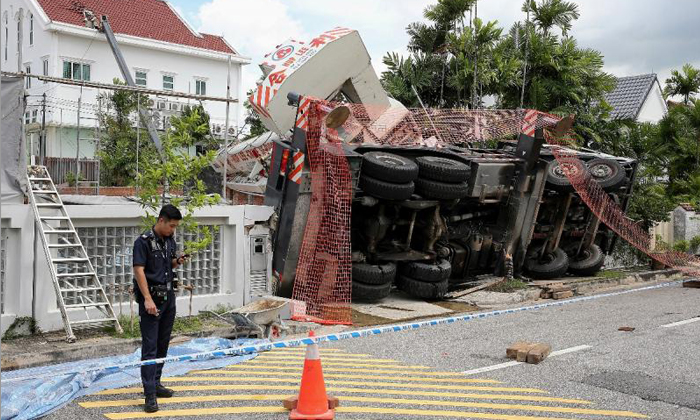 A crane toppled sideways onto a construction site at Siglap Plain, near Siglap Centre, yesterday morning.

"The crane was involved in the construction of a residential house when it toppled and struck two adjacent buildings causing damage to the roofs.

"There was no injury. A full stop work order has been issued to the occupier."

Retiree Joseph Lee, 68, who lives opposite the accident site, said: "If it had collapsed on this side, my home would have been wrecked.

"When my wife and I saw the crane in the morning, before we left our home, we already felt worried because it looked like it could topple over."

They were not home at the time of the incident.

A construction foreman, who did not wish to be named, was working at an adjacent site when he heard the crane crash at around 11am.

He said: "I was on the second storey of the house (I was working on) when I heard a very loud bang.

"I initially thought it was one of my men. But from where I was standing, I saw that the crane had crashed."

A Building and Construction Authority (BCA) spokesman told The New Paper: "On site, BCA engineers observed that a localised portion of the tiled roof of a two-storey detached house at 24 Siglap Avenue and the eaves of the roof of a detached house at 29 Siglap Plain were damaged by the crane boom."

There were 22 crane-related incidents in 2015 and 17 in the first nine months of this year.