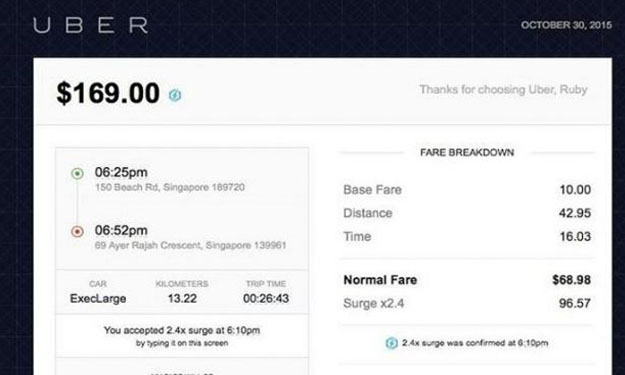 Her Uber ride from Beach Road to Ayer Rajah Crescent costs almost as much as a budget plane ride to Kuala Lumpur.

Business manager Ruby Lambert and her four colleagues were late for a meeting with their clients on a Friday evening last month and decided to book a car with Uber.

But she had a rude shock when she received the bill in an e-mail shortly after she reached her destination. Ms Lambert had to pay $169 for the 27-minute ride.

There was a surge pricing - an increased rate during peak hour - of 2.4 times when Ms Lambert booked the Uber car at about 6.10pm on Oct 30.

To accommodate everyone in the group, she had made a booking under the most expensive option, UberExeclarge, which has a base fare of $10, costs $0.60 a minute and $3.25 per kilometre.

A check online showed that the same route in a regular taxi would cost about $18, inclusive of peak hour and CBD surcharges.

Ms Lambert, who is in her 20s, said that the Uber ride had been uneventful until she found out how much it cost after she alighted.

She added: "During the meeting, I was just cursing, and everyone was just saying that the fare is crazy.

"I was in such a rush that day that I just acknowledged the surge pricing without thinking too much about it."

A spokesman for Uber said that they would always notify users through the app in bold print if surge pricing is in effect.

He added: "If the fare exceeds two times the normal rate, a multi-step confirmation screen appears and requires the rider to type in the price multiple to accept the higher fare.

"Users can also estimate the fare before requesting a ride by simply entering pick up and drop off locations in the app."

Ms Lambert, who admitted that she is not very savvy with apps, said that she has learnt her lesson.

She has been using Uber for the past four months but has not experienced surge pricing.

She doesn't use any other third-party booking apps.

Despite her experience, Ms Lambert said she will continue using Uber, adding: "I just thought using the app is very convenient because it is linked to my credit card.

"My experience so far has been positive and the drivers have all been very polite.

"But I think people should just be wary that the fare could be very high, and they should read carefully before accepting anything, even if they are in a hurry."