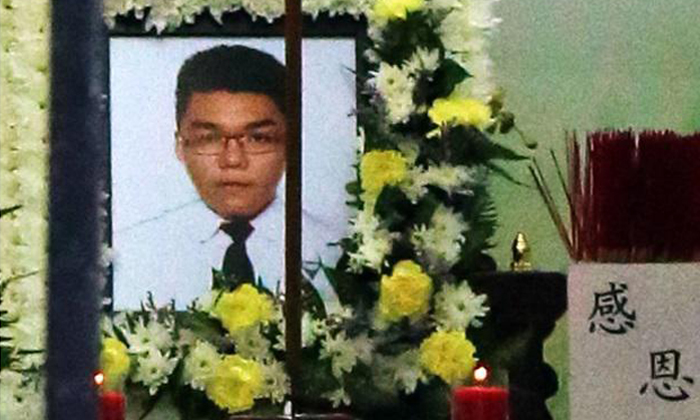 A 15-year-old boy, Tan Yao Bin, was apparently electrocuted and killed while having a shower on Tuesday night.

He suffered cardiac arrest and despite attempts by paramedics, who administered cardiopulmonary resuscitation (CPR), died later that night.

Neighbour Wendy Wee, 60, an administrator, said she was alerted to the incident when she heard a boy cry out for his mother in Mandarin.

The victim's brother, Mr Tan Qi Lin, 19, told The Straits Times he was doing his homework in the three-room flat at the time.

"My older brother, my dad and I immediately turned off the electrical supply at home. We saw that the wiring for the heater was exposed in the toilet itself," said the Institute of Technical Education student.

The Singapore Civil Defence Force (SCDF) said it received a call at 8.07pm and conveyed the victim to Ng Teng Fong General Hospital in an unconscious state.

The SCDF said paramedics administered CPR continuously throughout the journey to the hospital. But he was pronounced dead at the hospital at 9.56pm. The police are investigating the unnatural death.

Mr Tan said the family has been living there his whole life.

"I'm really worried about my mother. She's not coping well."

His mother works as a kindergarten assistant and his father is a production worker. Mr Tan has another brother, aged 21. His family and relatives were at the morgue yesterday morning to identify Yao Bin's body.

Mr Tan described his brother as "an intelligent and playful boy". He said the family will change the unit's electrical wiring, urging others to check on their heaters and electrical works regularly. "Check that the wiring for your heater is properly installed so that the same thing doesn't happen to your family."

A neighbour who wanted to be known only as Mr Tan, 39, said: "We are all worried now. We don't have knowledge of electrical works. It's hard to actually identify these issues until something happens."

The IT consultant continued: "We're heartbroken that this happened to Yao Bin. He was a lively and friendly boy and had good grades.

"We saw him grow up and he would come by our home to play. His parents have sacrificed a lot for their sons. This kind of thing shouldn't have happened."

A coroner's inquiry into his death last year found that he could have received the fatal electric shock when his hand came into contact with an electrically energised metallic shower outlet hose that was attached to a water heater.