15 people evacuated after fire breaks out at Orchard Towers 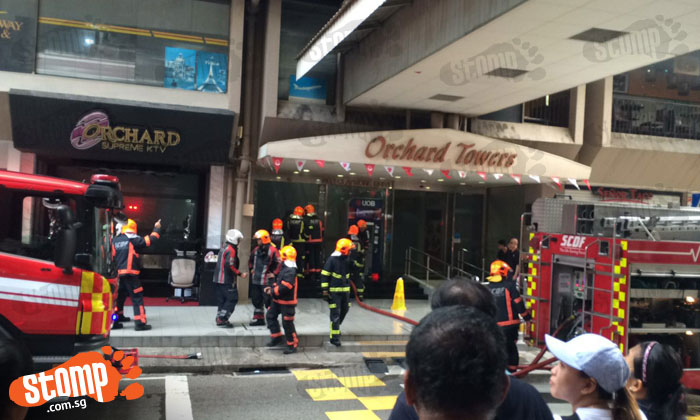 A fire broke out at Orchard Towers this morning (Aug 31) at around 8.15am.

Stompers Gillian and and KT shared photos and accounts of what they saw.

Gillian was on her way to work when she noticed a crowd opposite her workplace.

She then heard that a fire had broken out and saw a team of Singapore Civil Defence Force (SCDF) officers on the scene.

"The entire building looked so wet as though a swimming pool within had just had its water released.

"I just hope that it was not anything serious and that no one was hurt or injured!"

SCDF confirmed that they had been alerted to the situation at Orchard Towers at 8.15am this morning.

A spokesperson provided Stomp with the following lines:

"SCDF was alerted at around 8:15am at 400 Orchard Road and dispatched 2 fire engines, 2 red rhinos, 2 firebikes and 2 support vehicles.

"The fire was extinguished by SCDF using one waterjet.

"Around 15 persons self-evacuated prior to SCDF’s arrival, and there were no injuries reported.