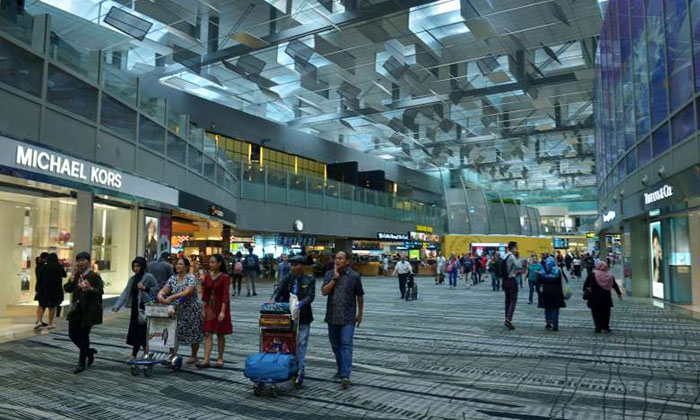 Entered Changi Airport's transit area? You'd better be getting on a plane, because misusing your boarding pass could get you in trouble with the law.

The police arrested a man and a woman in September 2016, who are believed to have entered the transit area on Sept 16 to purchase Apple's newly released iPhone 7. They apparently had no intention of departing Singapore.

The police reminded all passengers who enter the transit hall with a boarding pass that they should be there only for the purpose of travelling to their next destinations.

"Those who abuse their boarding pass to enter the transit areas, with no intention to proceed to their next destination, are liable for an offence under the Protected Areas and Protected Places Act," the police said.

Here are 12 other offences you may not have known about.

1. ANNOYING SOMEONE BY BEHAVING BADLY IN PUBLIC WHILE DRUNK

According to section 510 of the Penal Code, whoever, in a state of intoxication, appears in any public place, or in any place which he cannot enter, and behaves "in such a manner as to cause annoyance to any person", may be jailed up to six months, fined up to $1,000, or both.

That's going to be many people on a Saturday night at Clarke Quay.

2. ANNOYING SOMEONE IN A PUBLIC PLACE THROUGH AN ACT, OR BY RECITING OR UTTERING A SONG WITH LYRICS THAT ARE OBSCENE

According to Section 294 of the Penal Code, this carries up to three months in jail, a fine, or both.

According to Section 292 of the Penal Code, the penalty is up to three months in jail, a fine, or both.

What is considered obscene?

According to the Singapore Statutes, the word "obscene", is anything that tends to "deprave and corrupt persons" who are likely to see or read the materials.

You might want to think twice about selling that old sex toy on Carousell then.

4. PURPOSELY OBSTRUCTING A PERSON, SO AS TO PREVENT HIM FROM PROCEEDING IN ANY DIRECTION THAT HE IS ALLOWED TO WALK IN

Hopefully, the vendors at the wet markets know this.

6. YOUR DOG INJURING A PERSON

Any owner of a dog which causes injury to any person may rack up a fine of up to $5,000.

7. BATHING OR WASHING YOURSELF IN ON A PUBLIC ROAD, IN A PUBLIC TANK, RESERVOIR, OR ANY WATER BODY

Taking a shower at a swimming pool toilet may cost less.

8. FLYING A KITE THAT OBSTRUCTS TRAFFIC ON A PUBLIC ROAD

Anyone who flies any kite, or plays at any game, or does any act which obstructs or interferes with the traffic in any public road, or the use of the wires of any telephone may have to pay a fine of up to $5,000.

West Coast Park and Marina Barrage are good alternatives if you really would like to fly a kite.

9. ANNOYING SOMEONE BY MAKING NOISE IN ANY WAY, INCLUDING BY AN INSTRUMENT

Any person who makes any noise " to cause or be likely to cause annoyance or inconvenience to the occupier of any premises in the vicinity" may be fined up to $1,000.

Does your neighbour's bad karaoke singing at 3am count?

10. TAKING ALCOHOL INTO A PUBLIC HOSPITAL

Anyone who takes or tries to take without "due permission" into any public hospital any intoxicating liquor, drug or preparation may be jailed up to two months, fined up to $1,000, or both.

It is probably not the cure, no matter how convinced you are.

Tucked away among the better-known rules of riding the subway - no eating, no drinking, no smoking - is a Rapid Transit Systems Regulations prohibition against selling goods across the fare gate.

This rule has been in place for decades, but just in case you had not heard of it, at least one train station now has a notice in place for commuters.

Full-time national serviceman Xavier Lur was at Beauty World station on the Downtown Line when he spotted a sign with a quote from the relevant law: "No person shall for the purpose of any trade or business transfer any article or goods between the paid area and unpaid area unless the article or goods is taken by a person through an automatic gate."

"The notice has been put up at the Beauty World Station as we have noticed increasing numbers of commuters loitering to conduct what appears to be transactions in our premises."

Enjoying the air-conditioner in your car while waiting for your friends to return? Too bad - you could still be handed a fine.

Since June 2016, repeat offenders who leave the engines of their stationary vehicles switched on have faced higher fines by the National Environment Agency.

Motorists who are caught for a second or subsequent time now have to fork out $100, up from the previous $70. If the sum is not paid, they could face a maximum court fine of $5,000.

Under the Environmental Protection and Management (Vehicular Emissions) Regulations, it is an offence to leave the engine of a motor vehicle running while it is stationary for reasons other than traffic conditions.

So wind down those windows and turn off that engine - you may save on that petrol bill.