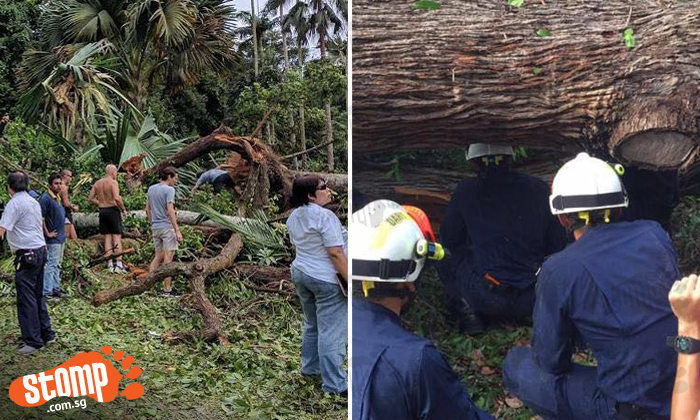 The woman who was killed and four others who were injured after a huge tembusu tree fell at the Singapore Botanic Gardens yesterday (Feb 11) have been identified.

Stompers Helen, Kelly, Othman, Faith and Eugene had alerted Stomp to the incident, which occurred at around 4.25pm. They also sent in photos and videos of the scene.

According to a Police statement, "The police confirm that the deceased was a 38-year-old female Indian national who was there with her family. Her husband, a 39-year-old French national and their two children, both aged one, sustained injuries. A 26-year-old female Singaporean was also injured in the incident."

The Straits Times reported that the tree had landed on the the Indian woman and pinned her face down, while her husband's head was bleeding after being hit by branches.

The deceased, identified as Ms Radhika Angara, was the chief marketing and strategy officer at global social and mobile payment platform Fastacash, who moved to Singapore in 2013.

The family's home is believed to be at a three-room condominium in the central part of Singapore.

NParks is investigating the cause of the tree fall and said, "It was last inspected in September last year and was found to be healthy."

The High Commission of Canada in Singapore issued a statement today (Feb 12) in response to the incident:

"The High Commission of Canada in Singapore is deeply saddened by the tragic accident that took place yesterday, February 11, 2017, at the Singapore Botanic Gardens.

"We wish to extend our sincere, heartfelt sympathies to the families and friends of the deceased and to those injured. Our thoughts are with them at this difficult time.

"We would also like to express our profound gratitude to those that came so quickly to the aid of others following the accident."