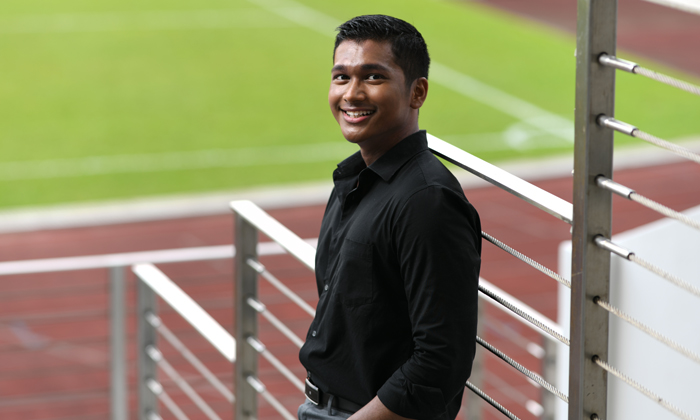 All Pathways Lead To Success

During his secondary school days, Izzat Bin Mahad looked forward to his Design & Technology (D&T) classes the most and gradually found his passion for mechanics and systems.

Despite struggling with other subjects, D&T was the one area where Izzat excelled in. With his growing interest in design and building, the Yuan Ching Secondary School alumnus went on to study Mechatronics Engineering at the Institute of Technical Education (ITE) and decided to pursue his passion in a polytechnic.

After attending SP’s open house, Izzat knew Singapore’s first polytechnic was the right choice for him due to its good reputation in the engineering field. With strong recommendations from his ITE lecturers, Izzat eventually enrolled in the Diploma in Bioengineering through the Joint Polytechnic Admissions Exercise.

As Izzat loves helping people from behind the scenes, Bioengineering was the perfect course for him as he gets to build medical systems and devices that would improve the welfare of the community.

SP nurtured Izzat’s passion in Bioengineering and he excelled in his course. The SP Engineering Scholar attributed his success to his bioengineering lecturers, whose guidance and dedication allowed him to effectively transit from ITE to polytechnic. The conducive learning environment in SP also provided Izzat an opportunity to learn from his peers during group projects, which are fond memories for him till today.

While most would choose to pursue an internship during their course, Izzat decided to work on an final year project (FYP) due to its flexibility and the need to collaborate with others. During his FYP, Izzat conducted research on different thermal characteristics to identify its strengths and limits when implemented in the various bioengineering devices. The hands-on experience also allowed him to better understand the practicality of his hypotheses.

During his time in SP, Izzat also participated in the Cogito Ideation Competition 2020 where his group worked on developing solutions to generate sustainable energy. Their idea was praised by the judges and they took first place in the competition.

Izzat’s team went on to develop a website to showcase their works. The website attracted the attention of the School of the Arts Singapore (SOTA). The group subsequently taught SOTA students lessons on alternative sustainable energy and provided a hands-on demonstration of sustainable solutions.

Coming from a humble background, Izzat is always keen to serve the community. He participated in an overseas community service project to Bintan, Indonesia, where he helped to develop proper solutions in their wastewater management. He also taught the locals proper hygiene methods, in a bid to improve their basic oral and body hygiene.

It was not all work and no play for Izzat. As Captain of the SP Goju-Kai Karate Club, Izzat inspired the team by winning Gold and Bronze medals in the Karate League.

Despite taking a longer education pathway than most, Izzat managed to overcome the odds with his burning passion for bioengineering. With his focus and determination to succeed, Izzat will be heading to Nanyang Technological University to pursue bioengineering with a minor in international trading.

We wish you all the best in your future endeavours, Izzat!