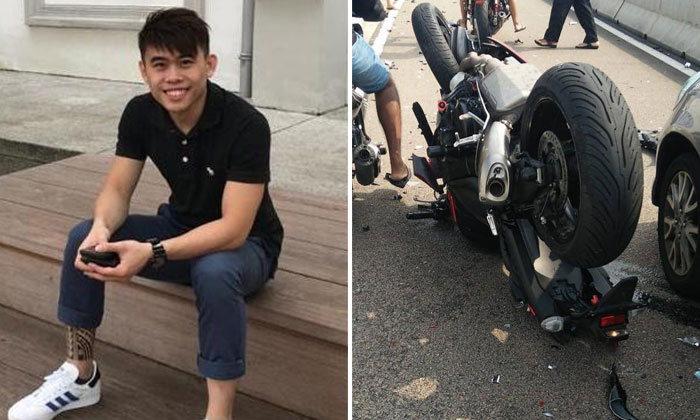 A motorcyclist from Singapore died several days after he was involved in an accident when heading to Malaysia for breakfast.

The man, 29-year-old public servant Cai Yu Heng, was headed north with a friend on Sunday (April 21), when the accident occurred on the Malaysian side of the Causeway, reported Chinese-language evening daily Shin Min Daily News on Wednesday.

Johor Baru police said they were alerted to an accident on the Causeway at 10.30am, involving a motorcycle and a Singapore-registered car, Malaysian Chinese-language news publication Sin Chew Daily reported on Sunday.

The accident happened in a motorcycle lane, about 80m in.

The motorcyclist was taken to the Sultanah Aminah Hospital in Johor Baru. He was later transferred to Tan Tock Seng Hospital in Singapore on Monday for treatment, said Mr Cai's sister.

His sister, who wanted to be known only as Ms Cai, 33, said that on Tuesday, he died from his injuries.

Ms Cai said he was married for only over a year and had a one-year-old daughter.

She added that the family hopes witnesses will come forward to help explain what happened or provide dashcam footage of the incident.

Police chief of Johor Datuk Mohd Khalil Kader told The Straits Times that the incident is being investigated under Malaysia's Road Transport Act.

He said that no arrests have been made yet but "action will be taken accordingly".

Under Malaysia's Road Transport Act, a motorist found guilty of causing the death of another person by driving recklessly or at a speed that is dangerous to the public, can be jailed for between two and 10 years, and fined between 5,000 and 20,000 ringgit.