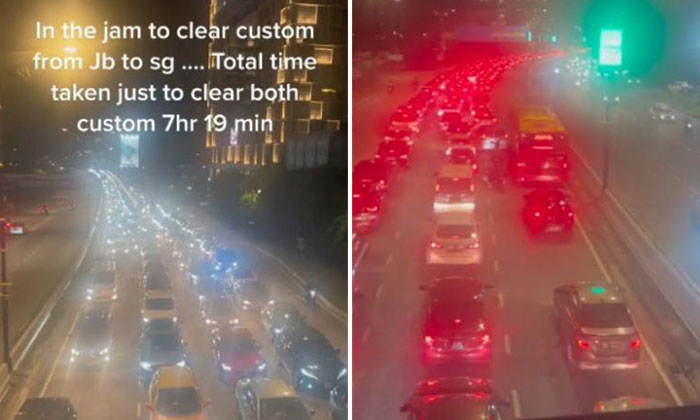 Lengthy traffic jams are a norm when it comes to crossing the Causeway. But one Singapore family had to endure a seven-hour jam just to get back home from downtown Johor Bahru.

On a weekday, no less.

In a TikTok video on Dec 20, Shin Chen, 36, said he visited JB with his family on Monday for a seafood meal and to do some shopping.

On his way home around 9pm, he encountered the mother of all traffic jams.

The five-second clip showed a view of the jam taken from an overhead bridge.

Speaking to AsiaOne, he explained that his family was using the bridge to get to a petrol station's toilet on the other side of the road.

They spent about six hours in the car inching towards JB Customs, Immigration and Quarantine complex.

During that time, Shin Chen said he watched YouTube videos, read articles and played Mobile Legends on his phone.

By the time this family crossed over to Singapore, it was already 3am.

Shin Chen said this was the worst traffic jam he ever encountered on the Causeway.

"I travel to JB quite frequently, but the most I've ever experienced was four hours stuck [in a jam]," he said.

While many people are known to be making the trip to Malaysia during the year-end period – often causing congestion on the Causeway –, Shin Chen also pointed out that the Malaysia customs were not working at full capacity that day as there were some counters under renovation.

Those commuting between Singapore and Malaysia during the year-end holidays can expect heavy traffic at the Woodlands and Tuas checkpoints, said the Immigration and Checkpoints Authority (ICA) on Monday.