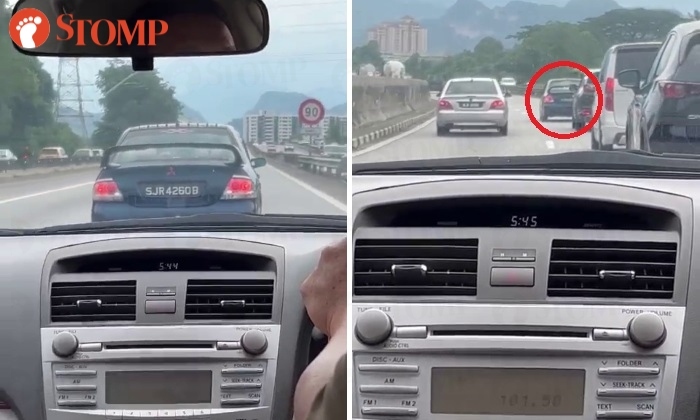 As Covid-19 travel restrictions are loosened, more Singapore cars can be seen on Malaysia roads – and more people are complaining about them too.

Petrol thief, litterbug and now we have a road-hogger.

Stomper migratemeplease submitted videos of a Mitsubishi car with a Singapore licence plate hogging the rightmost lane on the North-South Expressway just outside Ipoh on Friday (June 3), at 5.43pm.

She took the videos from a car behind the Mitsubishi. They can be seen going past a 90kmh speed limit sign. The Stomper said her car was travelling at 90kmh to 110kmh.

Later, when the Stomper's car moved to the left lane, three other cars started trailing closely behind the Mitsubishi as it continued on the right lane.

She said: "Even our car went to left side already for the cars behind us. The Singaporean car still refused to move for a while."

The Stomper, who is Malaysian, commented: "Are all Singapore cars like that? Hogging the fast lane?"

Motorists are generally advised to keep left unless overtaking or "ikut kiri kecuali memotong" in Malaysia.