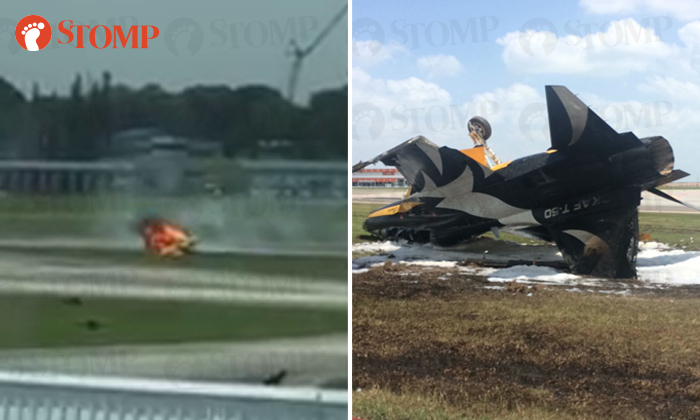 A single-seater aircraft taking part in the Singapore Airshow 2018 was involved in an accident while taking off at Changi Airport's Runway 1 earlier today (Feb 6) at about 1.30pm.

Several Stompers alerted Stomp to the incident and contributed footage of the plane, which had skidded and crashed into a grass verge.

Videos shared by Stompers Apid and Melvin show the plane catching fire and smoke emitting from it.

According to The Straits Times, the plane is part of South Korean aerobatic team, The Black Eagles, and was taking off for the flying display programme at the bi-annual event.

The aircraft had flipped over after its tyre burst upon taking off, reported ST.

According to a statement on Changi Airport's Facebook page, the Airport Emergency Service put out the fire.

"The pilot has been sent to the airport clinic for a check-up," it added.

"Runway 1 is closed until further notice. Some delays to flight operations are expected."

In addition, photos and videos of the accident have been circulating on social media.