Singapore Airlines responds after man disappointed by in-flight meal: 'I thought I was flying budget' 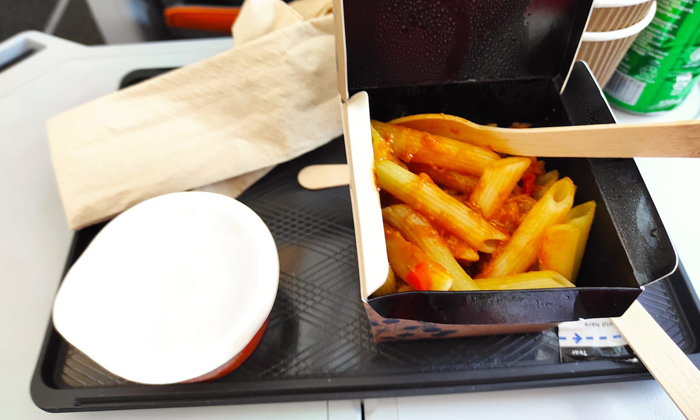 National carrier Singapore Airlines (SIA) has responded to feedback about its in-flight menu after a man complained about the food he was served onboard.

Facebook user Anderson Soh had expressed his disappointment over the meal he was served on an SIA flight from Singapore to Bangkok on April 30 and shared photos.

He said in his post on Monday (May 2): "Do you believe this food is served (on an) SQ flight... omg damn disgusting food... I thought I was flying with budget airlines, I think budget airlines Nasi Lemak even taste better. It was a big difference compared to pre-covid... Very disappointed with SQ...." 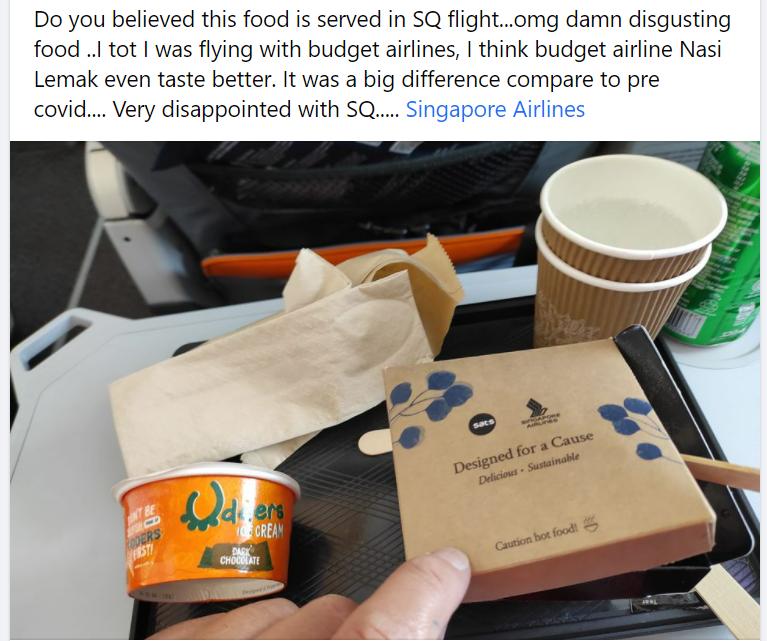 Soh also wrote in the comments that 'even army food tasted better'.

When contacted by Stomp, Soh said: "I was given only a miserable portion of pasta for the main course, which tasted horrible, and a mini tub of Udders ice cream.

"We were only offered two choices for the main course. Either pasta or Thai vermicelli with something which I can't recall. There were no other choices for the ice cream.

"There was also no more fruit, bun, cake or dessert."

Soh told Stomp that he subsequently provided feedback to SIA through a survey that was sent to his email.

He later shared how he had asked for laksa on his return flight to Singapore, which was a marked improvement and "tasted delicious". 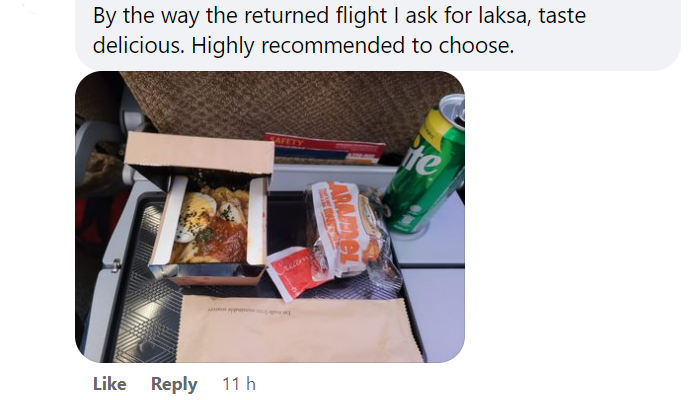 In response to a Stomp query, an SIA spokesman said the airline rolled out its new regional economy class meal concept for short-haul flights around 18 months ago on Dec 1, 2020.

The spokesman added: "This comes with a main dish and a dessert, and provides our customers with a greater variety of local Singaporean and international favourites using sustainable tableware.

"SIA did not compromise on the amount and quality of the food in the new meal concept. We have swapped the traditional casserole for a paper box that holds the same quantity of food but is much deeper.

"That way, our chefs have been able to introduce a greater variety of dishes to the menu including a wide range of Singaporean favourites such as congee, laksa, and gravy-rich mee siam that were previously not available in Economy Class."

Customers can learn more about the meals offered on their flights on SIA's website here.

"The paper used in the main course box and cup are Forest Stewardship Council (FSC) certified, and bamboo cutleries are also provided to significantly reduce the amount of single-use plastics. The paperware also weighs 50% less than before, lowering fuel consumption and carbon emissions.

"All of the waste is also brought back to Singapore and fed into an eco-digester, where it is converted into alternative fuel pellets."

SIA customers can learn more about the wider range of meals and sustainability benefits here.

The spokesman said: "We thank our customers for their feedback, and we would like to reassure them that we remain committed to providing an enhanced experience when they travel with SIA."

View more photos of Soh's meal in the gallery.