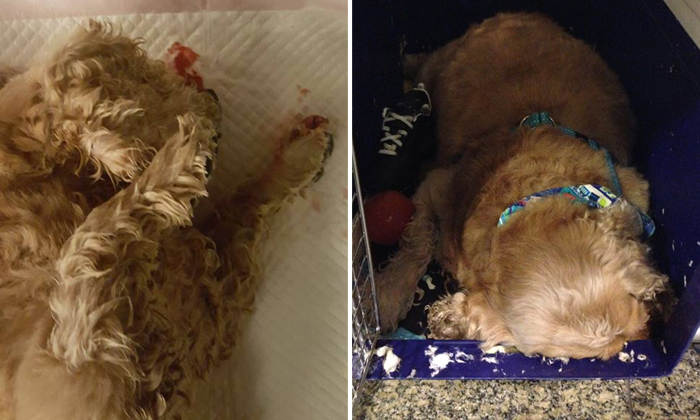 A passenger's pet dog died while being transferred to a Singapore Airlines (SIA) plane at Changi Airport on Sep 2 and the company is currently investigating the incident.

Shabana Mary Kuruvilla, who is the dog's owner, gave her account of events on Facebook and alleged that SIA's "negligence killed our pet, Charlie."

Charlie was an American cocker spaniel aged four years and seven months old. Ms Shabana and her family had owned him since he was 30 days old.

In her post dated Sep 7, Ms Shabana said she and her family were travelling to Ho Chi Minh via Singapore Airlines, and had purchased excess baggage "including Charlie and his crate which weighed around 22kg in total."

According to SIA's pet policy, pets -- except for medically certified service dogs -- are not allowed to travel in the aircraft cabins. Cats and certain breeds of dogs are permitted to travel as checked baggage.

Ms Shabana, who said she "had to make a fresh payment towards pet handling charges for Charlie" despite already paying for excess baggage, added that "Charlie's crate was secured with plastic tags" by SIA's pet handling staff.

"Charlie was wheeled away with his crate in a trolley around 11am. We proceeded to have breakfast and then at around 12.30pm, we went to the boarding gate," she wrote.

Staff at the boarding gate then told Ms Shabana that Charlie "was a bit anxious and had some mucus". They also asked if she would like to see him, said Ms Shabana.

Knowing that mucus and saliva was "normal" for dogs and not wanting to make Charlie even more anxious, the family decided to go ahead with boarding the plane.

Ms Shabana said, "While on board, the Captain made an announcement that we had a pet on board the aircraft", which she assumed was referring to Charlie.

However, upon landing in Ho Chi Minh, SIA staff informed the family of Charlie's death.

Ms Shabana wrote in her post: "We broke down in complete shock. We wanted to see him.

"We were in for a bigger shock. Charlie died not on the flight but he was not on the plane as he died in Singapore. We were terribly shocked.

"We demanded to understand how it happened, why we were not called and informed that Charlie had an issue or if he was distressed, and why we were allowed to board and no announcement made to let us know before the aircraft took off."

Ms Shabana, who returned to Singapore at 10pm on the same day to collect Charlie's body, observed that "there was evidence of a big struggle [in the crate] due to distress. He had chewed up the entire wee pad made of cotton".

She further alleged that SIA had been negligent in its handling of Charlie and slammed the airline's staff for poor customer service. She has also made a police report.

According to The Straits Times, SIA confirmed Charlie's death and said the dog belonged to passengers who had travelled on flight SQ184 from Singapore to Ho Chi Minh City.

A spokesman added: "We are conducting an investigation and for privacy purposes, we are unable to share further details. We wish to express our sincere condolences to the owners at this time."

Ms Shabana told ST that SIA has informed her that the matter is under investigation.

She added: "I want the airline to take this incident seriously as it clearly handled the matter in an insensitive manner. I am hoping this incident helps the airline make changes to the way pets are handled to ensure more safety for pets."