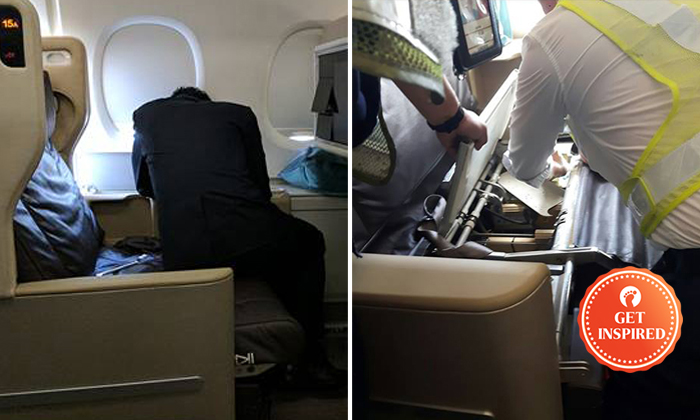 Singapore Airlines (SIA) has always been known for its consistently excellent service, which locals and foreign travellers alike can attest to.

Its employees have been lauded by impressed passengers on several occasions, such as when a stewardess was praised for assisting a diabetic elderly woman on board and another made waves online for helping a child cut up his food.

This time, a chief steward of Singapore's flag carrier has been commended by passenger Gary Leung for going "waaaaaay above and beyond" his call of duty.

Mr Leung wrote in a post on Singapore Airlines' Facebook page about how Chief Steward Foo Wen Huee "was so determined to help me, he spent what felt like more than half the flight time trying to resolve the issue – and even broke into a sweat!"

Although the incident took place more than three months ago in June and was deemed by Mr Leung as "very stupid", "it demonstrated the extremely high level of service that Singapore Airlines is famous for."

Mr Leung said that he had been trying to switch SIM cards in my mobile phone on Flight SQ860 a "small accident" happened.

"As I was fiddling with my phone, pin, and sim card, my clumsy self somehow lost grip of the tiny nano SIM card.

"And of all the places it could’ve fallen onto, it decided to dive down the tiny gap between the storage compartment and the side of the business-class seat (where the armrest is)."

The only way to get the SIM card out was to "patiently slide it forward beyond the armrest".

However, even though Mr Leung tried retrieving his SIM card using an in-flight magazine, safety procedure card, his charging cable and his earphones, his efforts proved to be futile.

A stewardess, made aware of Mr Leung's plight, went to seek assistance her team.

Mr Leung continued: "That's when Mr Foo introduced himself to assess the situation. After scouring the plane, he could not find any sort of retrieval tool.

"But that only motivated him further. He disappeared and came back with a creative McGuyer-style hack: two ice prongs straightened and taped together.

"I felt guilty that two prongs had to be sacrificed, but Mr Foo insisted on not only on his ingenuity, but that he would put his DIY tool in action himself.

"That was the start of what was many, many minutes of chief steward turned part treasure hunter, part fisherman, 100% awesome. Not once. Not twice. But multiple sessions. And in his full uniform, suit jacket and all."

According to Mr Leung, he then pleaded with Mr Foo to let him take over so that the latter could take a break -- only to apparently make matters worse by pushing the SIM card even further.

He also explained that the SIM card was important as it contained sensitive information and he would not be able to replace it until he returned to Singapore again in October.

Mr Leung said that he had given up on finding the item but Mr Foo "had one more trick up his sleeves".

"He contacted the ground staff to come onto the plane immediately after reaching the gate. If this isn't service, I don't know what is," wrote Mr Leung.

"As I was waiting for my baggage, Mr Foo sent me photos via WhatsApp of the engineers who literally dismantled parts of the seat -- all this for a measly SIM card. To the crew and staff, it wasn't the object at hand but the objective."

Expressing his immense gratitude to all the staff involved in the "rescue mission", the frequent SIA flyer added: "To Mr. Foo and all the other employees, it was just another day on their jobs. To me, it was a lifelong memory that reaffirms my loyalty to this airline."

And although the SIM card was never found, "nevertheless this was about Mr. Foo and all the hardworking employees that go out of their way every day to make our travels safe, smooth, and memorable."

In response to Mr Leung's post, an SIA spokesman said: "Our cabin crew undergo extensive training on how to cater to different customer groups. Training equips our crew with skills to understand and meet the needs of a wide range of customers.

"We are pleased that our crew member was able to assist our customer on this occasion."

Mr Leung's post has garnered over 9,300 likes, with netizens praising Mr Foo and SIA for being "the best airline on the planet."

Some also shared their own memorable experiences with SIA:

Truly a great way to fly!