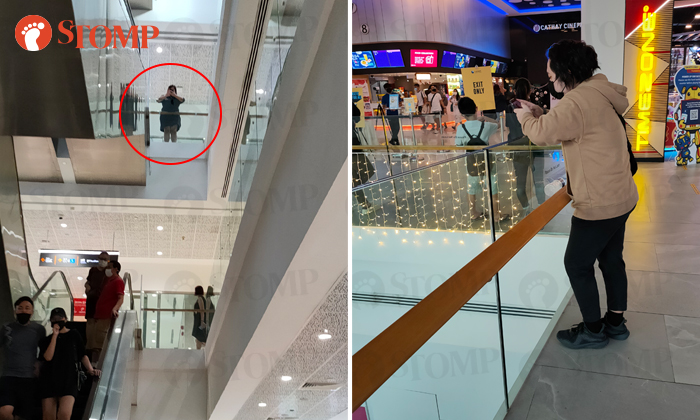 You are probably no stranger to seeing people use their mobile devices while resting their arms on the railings at shopping centres.

In fact, you might even be guilty of doing so.

Well, perhaps you should think twice or exercise some common sense, as one concerned shopper points out.

Stomper YX said: "Shoppers resting their arms on railings while using their mobile phones in shopping malls are a common sight. I have seen this for a very long time."

In an email titled 'Senseless habit could kill innocent people', YX also shared several photos of shoppers in the act of doing this at AMK Hub on Sunday (Dec 20), at around 6pm to 7pm.

The Stomper added: "The crowd was heavy as usual on weekends so there were many people walking below.

"We are lucky that so far, there has been no incident of phones falling off a user's hand and smashing into someone several stories below.

"Please exercise common sense - do NOT use your mobile phone in this way.

"Another person might accidentally bump into you and cause you to drop your phone onto someone's head below, or you could somehow loosen your grip.

"That innocent soul below could be the sole breadwinner, a mother to several kids, an elderly fit as a fiddle or a small baby.

"Can you imagine the dire consequences because of this senseless habit of yours?"

Related Stories
Toa Payoh shop employee fired after being so engrossed with phone that he doesn't see boy take $288 from counter
Jail for man who didn't notice daughter choking to death as he was engrossed in phone game
Female passenger distracted by phone on train doesn't notice man stroking her thigh for 30min
More About:
dangerous
safety
crowd