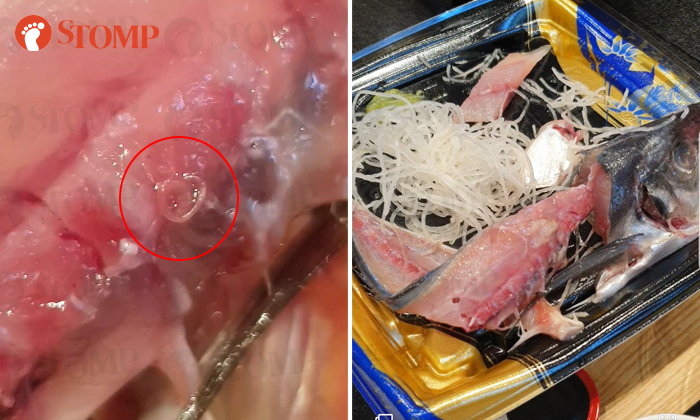 The Singapore Food Agency (SFA) is investigating an incident in which a man found a worm-like parasite in his mackerel sashimi from Japanese supermarket Don Don Donki.

He recounted: "This was our first time buying sashimi that is served with the mackerel skeleton. We were enjoying the sashimi slices until my eyes caught a glimpse of something moving on the flesh near the bone.

"I wasn't certain of anything until I zoomed in on the mackerel using my Samsung Note 9 camera. To our surprise, the live worm-like parasite appeared on the mobile screen."

Anonymous said he "lost all appetite" and was left "feeling sick" after seeing the parasite.

He told Stomp: "We took photos and videos as evidence, before approaching a Don Don Donki employee for an explanation and refund. We left our contact details behind too."

According to Anonymous, the employee apologised and provided a refund for the mackerel.

The Stomper, who subsequently reported the incident to the SFA, said: "We are unsure if there were parasite eggs in our consumed food.

"We caution everyone to check their raw food before consumption."

Responding to a Stomp query, a Don Don Donki spokesman said: "We are currently in contact with the customer as he has also sent us a Facebook message after the incident.

"With regard to this, we have since conducted investigation and there were no similar findings or feedback from our other customers on our sashimi.

"From the video provided by the customer, the worms shown are a common parasite found in fresh fish which should have been removed by our staff if they are seen visually.

"The sashimi slices from this fish have also been soaked in iced salt water to remove any parasite. However, these parasites are known to travel deep into the bones of the fish which cannot be seen visually. In this case, the parasite might be in the bones which was used to display with the sashimi slices.

"As communicated to the customer, we have and will always handle our sashimi slices with caution. However, we have since taken up additional measures to further prevent this from happening in future:

"In most cases, these ingested parasite will be digested and processed by the human body. However, we understand that there may be rare cases where the parasite may inhibit in the human body.

"We have asked the customer to seek medical attention should he feel unwell and inform us so that we can assist him."

In response to Stomp queries, the SFA confirmed that it has received feedback and is investigating the matter.