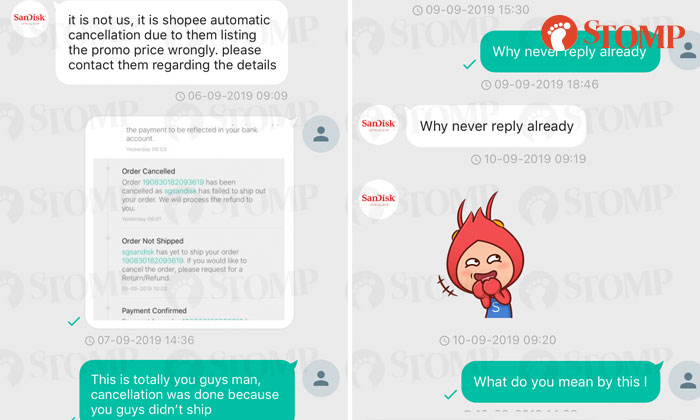 Online shopping has become increasingly popular with its ease of use and frequent deals that buyers cannot always get from a physical store.

Stomper Jeremy's father was happy to snap up a good deal for a 2TB solid-state drive (SSD) from SanDisk on Shopee but was disappointed and subsequently frustrated when his order was cancelled.

The photography enthusiast had paid $264 for the SSD. It's recommended retail price was $690.

However, on Sep 5, he received a notification that the order had not been shipped yet.

The next day (Sep 6), he was notified that the order was cancelled and that his money had been credited back to his credit card.

Puzzled as to why the order was cancelled, Jeremy's father messaged the seller, SG SanDisk (@sgsandisk), to ask what had happened.

The account said that Shopee had cancelled the order as they had listed the promo price 'wrongly' and told him to contact Shopee for more details.

Jeremy's father then forwarded a message he received from Shopee explaining that the order was actually cancelled because the item was not shipped out during the designated time period. 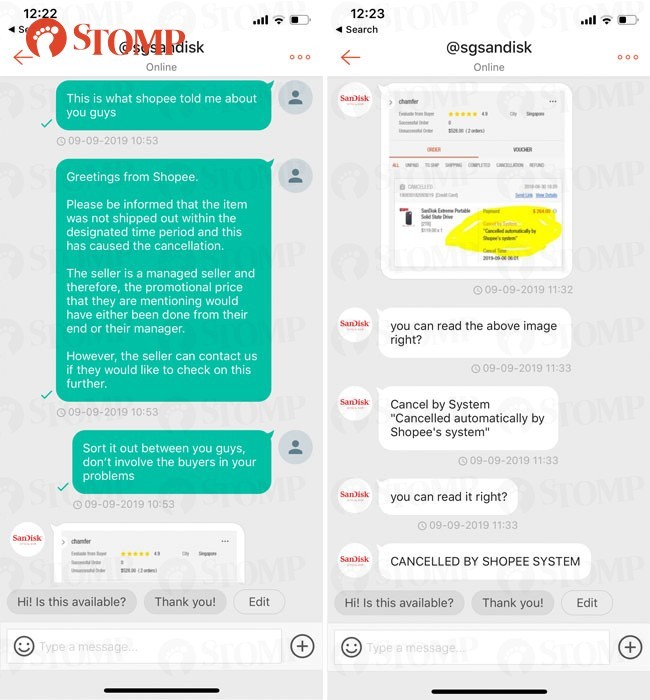 It added that the promotional price is managed by the seller.

"When he shared Shopee's response with SanDisk, SanDisk got mad and replied rudely and asked my father repeatedly if he can read," said Jeremy. 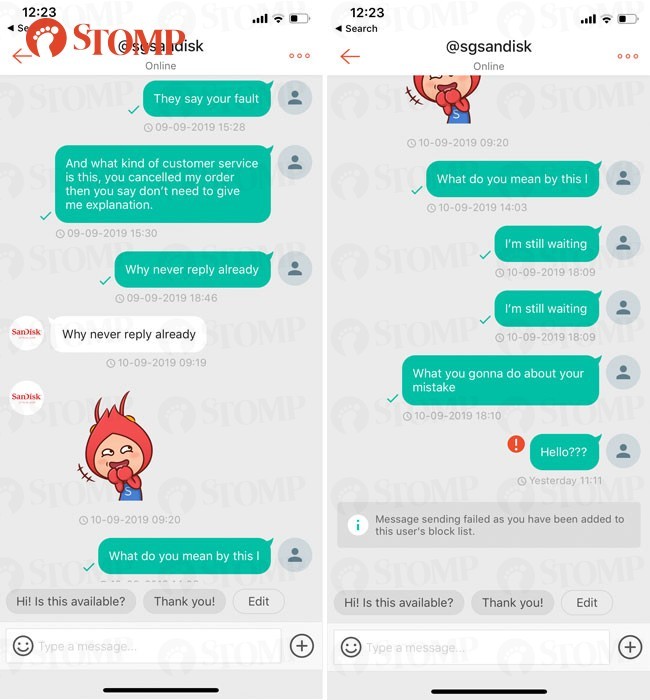 "My dad prompted them for answers but eventually got a 'nay' sticker from SanDisk and was shortly blocked.

"This was frustrating even for me when I read through the chat.

"How could SanDisk not honour the purchase and still be so 'yaya' about it?"

Jeremy said that he wanted to share his father's experience to warn others: "Getting good deals online may not be yours until you receive it.

"My dad thought he got a good deal but in the end, all he got was frustrated!"

In response to a Stomp query, a Shopee spokesman issued the following response:

"Shopee is committed to protecting the interests of all our users, and to offer them a safe and seamless shopping experience.

"We have reached out to the buyer to resolve his concerns.

"We are also working closely with the seller to ensure that such an incident does not occur again in the future."

"We have worked with Shopee Singapore to look into the matter and reached out to the buyer to resolve his concerns.

"We will continue to work closely with Shopee to ensure that such incidents do not occur again in the future."

Related Stories
Buying over $400 worth of products online? Take note of whether you have to pay GST charges first
Reality is far from expectations for these Stompers who bought items online
Carousell user says dress has "no defect" -- but buyer gets it with stains, torn seams and odour
More About:
customer service
bad service
rude
online shopping