Shopee seller suspended after sending customer cardboard instead of ladder, says he was on MC 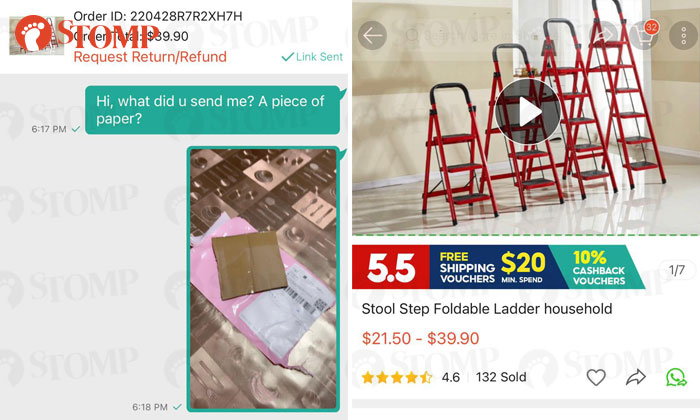 E-commerce platform Shopee has suspended a seller after he sent a customer a piece of cardboard instead of the stepladder she had ordered.

Stomp earlier reported Stomper Gen paid $39.90 for the stepladder and was shocked when she did not receive the product as advertised.

Following the article, the seller reached out to Stomp and said their assigned courier would not take and deliver the ladder because it was more than 150cm.

"We have been delivering these ladders on our own," he said.

"The Shopee system doesn't recognise our delivery unless we use their courier.

"Basically on top of delivering the actual item on our own, we need to use their courier system to show the item is delivered.

"Therefore, we have been sending a cardboard via their courier while delivering the actual product on our own."

The seller added that he was preparing to deliver ladders for the whole week on Apr 30 when he injured his back.

"It was so serious that I could not stand up," he said.

"The paramedics were activated and I was sent to the accident and emergency department."

He shared with Stomp a photo of his medical certificate (MC) from Khoo Teck Puat Hospital.

"We continued to deliver some of the ladder orders on May 3 when I could finally stand up and walk a bit," he continued.

"Some of the orders were refunded by Shopee.

"On that day, we were unable to contact Shopee as it was a public holiday so we continued to deliver the ladders despite the chance of being unpaid."

When Stomp reached out to Gen for an update, she said she did not receive any ladder.

"Shopee has refunded me," she said.

"But awareness of such scams should be made aware to the public.

"The envelope the seller sent stated "ladder" so it was very obviously done on purpose.

"To date, the seller has not dared to reply to my message on why he sent me a piece of cardboard."

A Shopee spokesman told Stomp it was aware of the case.

"We investigated the issue and have since suspended the seller and issued a full refund to the user," the spokesman said.

"Shopee is committed to creating a safe shopping environment for our users.

"We have stringent guidelines in place on the sale of products on the platform and will continue to work to make online shopping more enjoyable for everyone."