Shopee seller calls Stomper 'garbage' after he requests for refund 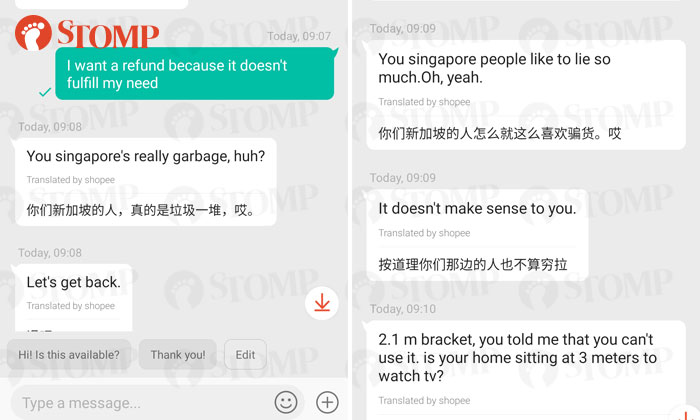 A Stomper was confounded when a seller insulted him and called him 'garbage' after he requested a refund for a projector stand he had bought.

Stomper Z shared with Stomp he had ordered the projector stand about two weeks ago but was disappointed by its quality when he received it.

"It came with a slight dent and I felt it was not stable enough to hold up my projector," he said.

He requested to return the product in exchange for a full refund.

"To my utter disbelief, the seller became insolent," he said.

"Said seller used a Cantonese vulgarity which was not fully translatable in English.

"All these responses were made without any provocation on my part.

"I merely asked for a refund because I was dissatisfied with my purchase, a refund guaranteed by Shopee.

"I called Shopee and got the refund.

"I told them that they should get back to me as to how they would deal with  this kind of unacceptable behavior by a seller.

"I haven't heard from them since."

The Stomper added this was the first time he has encountered such "unwarranted online abuse".

"I searched online for any independent forum to address such cases but did not come up with much.

Should not online users who exhibit such abusive behaviour be brought to task just like when it happens offline?"