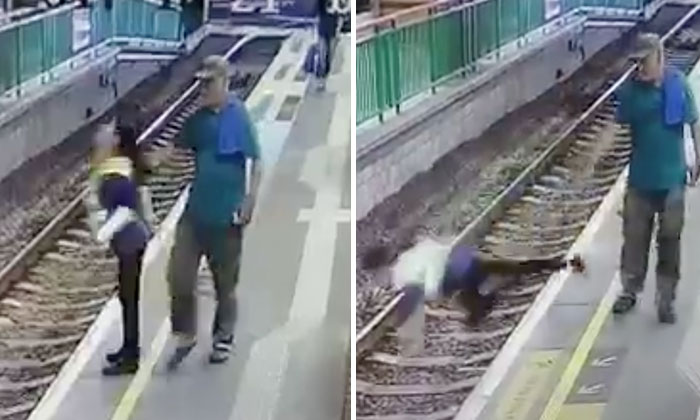 A man was arrested in Hong Kong last Saturday morning (Oct 21) for allegedly shoving a cleaner onto train tracks.

The incident happened in Yuen Long Town and was captured on closed-circuit television (CCTV), reports The Straits Times.

In the footage of the video shared by Facebook user Ellis Kwong, the 59-year-old cleaner, Ms Leung could be seen standing on the platform and waving to a colleague on an opposing platform.

According to the timestamp on the video, the day was October 21, around 10.22am.

The 56-year-old suspect sneaked up behind her and pushed her with his right hand, causing the cleaner to fall off the platform.

He walked away calmly after that.

Fortunately, there was no train approaching as the cleaner lay on the tracks.

The suspected was later arrested near the terminal, for his alleged involvement in the case of assault, causing bodily harm.

"The woman suffered injuries to her jaw and was sent to Pok Oi Hospital for treatment.”

Related Stories
Nissan driver assaults chauffeur after cutting lane at Malaysian Customs and hitting his car
Cabby assaulted by passenger at Segar Road condo shares his side of the story
Golden Mile attack allegedly due to staring incident: Why are such immature acts still happening?
More About:
assault
Hong Kong
injured