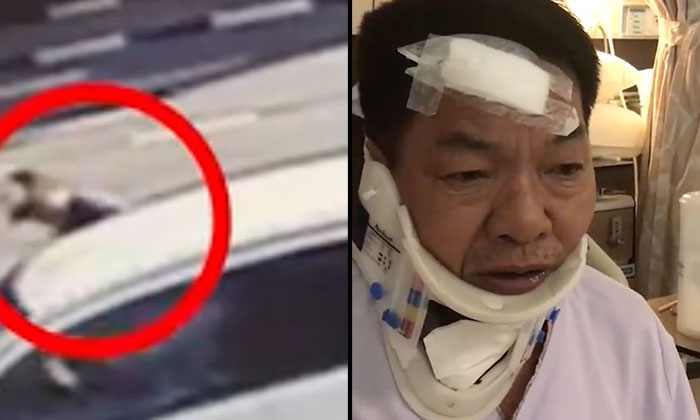 New CCTV footage shows how 67-year-old GrabCar driver was repeatedly punched by assailant through his car window at Simon Road in Hougang.

Stomp previously reported on the incident which happened on Wednesday (jun 14) at around 4.40pm, in an earlier article.

Stomper Jeslyn, who is the victim's daughter, had alerted Stomp after her father was hospitalised from the assault.

The assailant had claimed that the victim was blocking his vehicle from leaving a parking lot, and the two got into an argument, reports Shin Min Daily News via Lianhe Zaobao.

The new footage shows how the assailant, dressed in black and wearing a cap, had alighted his vehicle and proceeded to snap photos of the victim’s car.

The assailant then proceeded to knock on the victim’s window.

When the victim wind down his window, the assailant reached in and punched him several times.

The victim later told reporters that he was punched six times in his face.

He said that after he was punched, he reached for a can of air freshener to spray at the assailant, hoping that it would repel him.

However, that only angered the assailant, and before he could actually use the spray, it was snatched from him.

The assailant then battered his hand with the can until his head bled.

He suffered a 4cm-long laceration on his head as a result.

The victim has since lodged a police report.

The police said that the incident was under investigation as a case of Wounding with Intent.