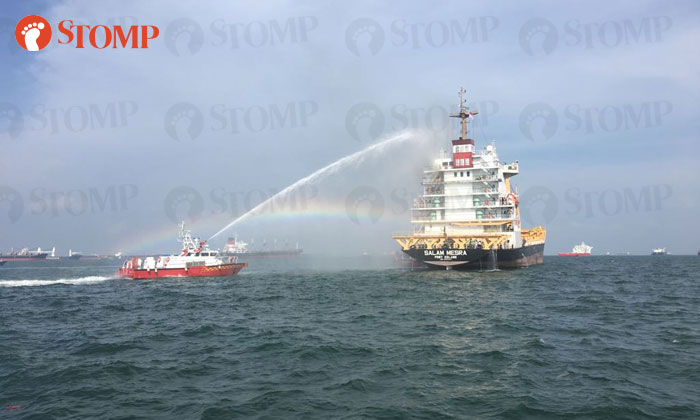 A ship caught fire on the waters off Marina Barrage on Monday (July 16).

Stomper Karthik alerted Stomp to the incident and shared photos and a video he had taken of a vessel firing a jet of water at the container ship called Salam Mesra.

The Singapore Civil Defence Force (SCDF) said in a Facebook post that they were alerted at 3.10pm to the fire that involved contents of the crew cabin on the upper decks of the ship.

Four firefighting vessels were deployed from the SCDF Marine Command in response to the incident.

"Upon arrival, SCDF Marine firefighters adopted a two-pronged approach namely, boundary cooling on the exterior of the affected ship using 2 water monitors from the Rapid Response Fire Vessel and deploying 2 water jets to penetrate into the cabins to mitigate the deep-seated fire," said the SCDF.

"After approximately 5 hours of firefighting operations, the fire was extinguished."

No injuries were reported, and all crew members of the ship were accounted for.

SCDF Marine firefighters also conducted damping down operations to prevent any potential rekindle of fire from the hot burnt surfaces.