Shhh! Man surprised by stranger on phone walking into his workshop to ask him to be quiet 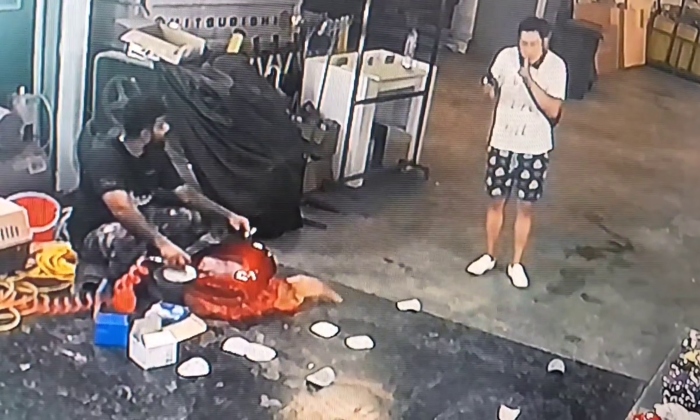 “Could you keep it down please – I’m on the phone.”

We’ve all been told this at one point or another by a friend, family member or colleague.

But in your own workshop, by a complete stranger?

A handyman working in his workshop in Jurong was told to “cut the noise” recently by a man who sauntered in while on the phone.

The puzzling incident was captured on CCTV and uploaded on Facebook, leaving netizens rather amused.

Doing My Sanding Work... Notice This Guy Walking Here And There Talking On The Phone....Suddenly Ask Me To Keep Quiet.....

The clip shows the working man sanding a motor part while a man in white paces around nearby.

While the CCTV camera didn’t capture any sound, the handyman’s work must’ve caused quite the ruckus as the man circles back to him. He then puts a finger to his mouth, signalling him to “be quiet”.

Taken aback, the handyman argues with the man until the video comes to an end.

In his caption, the handyman said the man on the phone was frustrated as the shop he wanted to visit was closed.

Still, he couldn’t understand why the man couldn’t just move to a more conducive environment – “he had the whole building” – to talk on the phone.

Thankfully, nothing other than words were exchanged.

Related Stories
Residents lose sleep over noisy late-night gatherings at Choa Chu Kang rooftop garden
Jaguar driver blares horn, then rages at workshop owner who knocked on her car to check if she is alright
Woman sells Bedok flat after putting up with neighbour's noisy parrot for a year: 'It's hard for us to sleep'
More About:
noisy
Jurong
stranger
noise
cctv
facebook