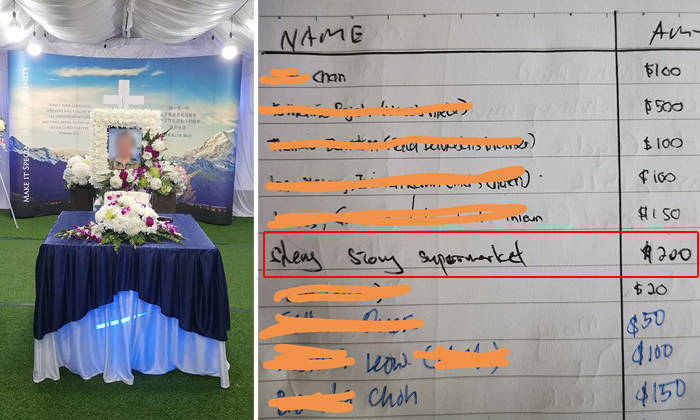 A Sheng Siong employee who secretly contributed $200 to the money collection box at a stranger's funeral wake did so as part of the supermarket chain's long-standing practice, a spokesman told Stomp.

The incident came to light when Mr Caleb Low, 34, shared how a stranger tried to "quietly slip" the cash into the money collection box at the wake of his wife's grandmother.

In his Facebook post on on Monday (June 1), Caleb said that his cousin had first spotted the stranger and "instinctively stopped him" as she did not recognise him.

Caleb's cousin said to the the stranger, "Sorry, may I know who you are? This collection box is for our guests and relatives."

The stranger later admitted that he worked at Sheng Siong after "further probing".

According to Caleb, the employee said: "Our management told us to walk around the estate and look out for wakes during this circuit breaker period. And we would give a small financial contribution. That's why I'm here."

When asked to sign the funeral accounts booklet for the sake of records, the employee "took a pen, paused for a while... then wrote under the 'Name' column: Sheng Siong Supermarket".

Caleb, who owns his own business as a brand coach, wrote: "How awesome is this? Thanks Sheng Siong for this very compassionate gesture."

He also vouched that Sheng Siong was not doing this as a public relation stunt, and said he had tried tagging them in his Facebook post but they "untagged themselves immediately".

Caleb said: "Thoroughly impressed by this organisation who lets their actions speak louder than words.

"This is an example of how everyone of us has the ability to be a #GreaterSignificance to others, especially in a time where we need to stand by each other more so than ever!"

When contacted by Stomp, Caleb said: "We were definitely pleasantly surprised. It was a very warming gesture. For us to go through a funeral during the Covid-19 season, there was a lot of added stress.

"But this was an unexpected gesture that we weren't looking for. It really touched us a lot. It made us feel appreciated by an organisation who cares."

He told Stomp: "Whenever they pulled out the receipt during the lucky draw segment, she would always wonder whether it would be her name that was being drawn.

"She would always wonder out loud what to do with the money if they picked her name.

"We cousins were laughing about how technically, she did win a prize from Sheng Siong."

In the comments section of Caleb's post, several netizens also shared similar acts of kindness that they had received from Sheng Siong.

Responding to a Stomp query, a Sheng Siong spokesman revealed that this has been the supermarket operator's practice "for over 30 years."

The spokesman added: "When our staff is aware of funerals near our stores, they will offer condolences to the family.

"This is just Sheng Siong's way of keeping the 'kampung spirit' alive."

Sheng Siong previously won praise when it was reported on April 29 that all staff would be rewarded with an additional month of salary due to a jump in net profit.