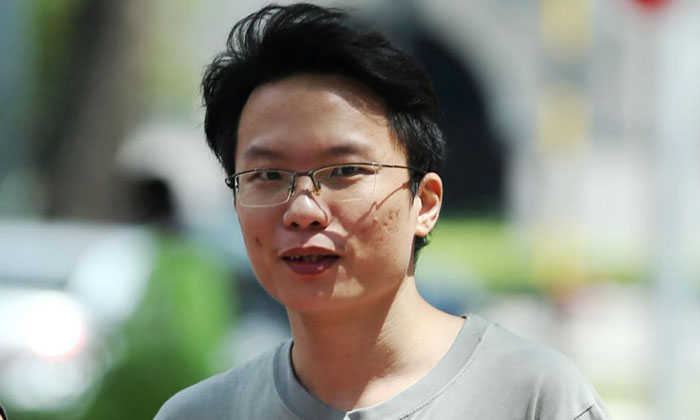 An administrator of the SG Nasi Lemak Telegram chat group was found with more than 11,000 obscene photos and videos on his devices.

He pleaded guilty to three counts of distributing obscene material, two counts of facilitating the provision of sexual services, and one count of possession of obscene films.

Another eight similar charges were taken into consideration.

The father of two was unemployed at the time of his offences.

The police received 31 reports against SG Nasi Lemak from March to October in 2019.

The group was used as a platform to share obscene photos and videos, many of which are believed to have been of Singaporean women.

It was reported to have promoted vice activities too.

The Telegram chat group was created in November 2018, and had grown to more than 44,000 members at its peak, with 29 admins.

Four suspects believed to be admins or users, including Liong, were arrested simultaneously in a police operation on Oct 14, 2019.

The police seized Liong's laptop and his five phones.

He was initially highly uncooperative and refused to provide passwords or access codes for the seized devices.

But he later provided the pin code for his account with the moniker "Crazy Rich Asian".

The court was told that in 2016, Liong developed a close relationship with a vice worker he frequented often.

The woman introduced him to a man he came to know as Hua Ge.

Liong later collaborated with Hua Ge to promote content from a vice website, posting about the site on social media and in the SG Nasi Lemak chat group.

The accused received cash of about $300 to $800 each week for his services.

He also transmitted pornographic material in the group.

He said the accused would have made at least $11,000 from advertising the vice website.

Liong's lawyer R.S. Bajwa asked for a jail term of one month and one week.

Mr Bajwa told the court that his client was "just uploading along with everyone else in the group" and did not have money to pay a fine.

District Judge Janet Wang noted that the accused was a first-time offender and had eventually cooperated with the police.

She also gave a default jail term of six weeks if the fine could not be paid.

Mr Bajwa then asked the judge if she could issue an order to prevent the publication of Liong's face in the media, saying that his young sons might be traumatised seeing their father's picture in the news.

The judge denied the request, and said that public shaming was the inadvertent consequence of Liong's wrongdoing.

Liong was given the maximum fine for possession of obscene films, but could have also been jailed for an additional six months.

For promoting the vice website and vice services, he could have been jailed for up to five years, or fined up to $100,000, or both.

The SG Nasi Lemak chat group has since been shut down.

Two of the others who were arrested have been dealt with. The case against the last man, Leonard Teo Min Xuan, 27, is still before the courts.