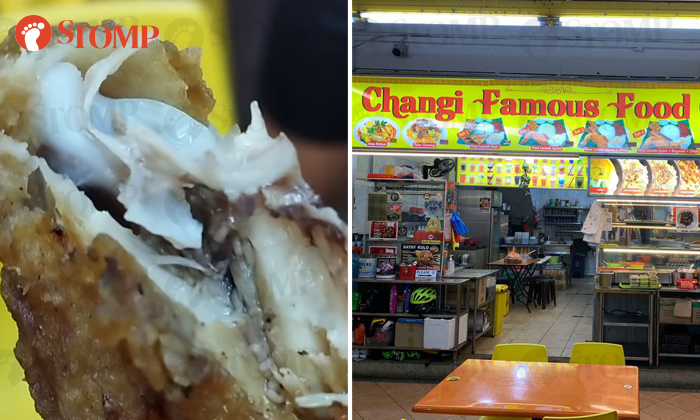 The Singapore Food Agency (SFA) is investigating an incident in which a man found maggots in his chicken wing from a food stall at Changi Village Road.

Stomper Irvin said he and his two friends had ordered nasi lemak from Changi Famous Food Centre on March 9, at around 4.30am.

However, he was not impressed as "the cucumber and the otah were dry". His experience then continued to take a turn for the worse.

Irvin recounted: "Now comes the grotesque part! While I was eating the chicken, I realised it was very hard and the colour was disorientated. It was also very dry and cold.

"Without much thought, I took a bite and immediately it made me sick in my stomach to notice that there were a lot of maggots inside!

"My friends and I puked immediately and it was really very bad!"

According to Irvin, they had vomited in front of the staff working at the stall.

"When approaching the stall to inform about the incident, we found the night shift staff member sleeping comfortably on his foldable chair.

"I was wondering to myself if he'd even bothered to check if any housefly or insects had come into contact with the food, which was laid out in the open with a glass cover like those chicken rice stalls.

"Upon hearing about the maggots, the staff member didn't have much reaction. All he replied was, 'I am a part-timer, I don't know why there are maggots. I will call my boss and inform' in a monotone.

"He did not look surprised or shocked at all. He also didn't handle the situation until I instructed him to throw all the remaining food and asked for a refund."

Irvin said he is unsure if there were also maggots in his friends' food, adding: "They aren't picky eaters and had already kind of finished their food.

"As for me, I used to work in the kitchen so I am very particular about the food I eat."

Irvin said he and his friends reported the matter to SFA "the moment we caught our breaths after vomiting."

The Stomper also shared his "atrocious eating experience" in a Facebook post on Saturday (Mar 12). The post has been shared over 1,700 times, with many netizens expressing their disgust.

In response to a Stomp query, SFA said it has received feedback and is investigating the matter.

The agency told Stomp in a statement on Tuesday: "Food safety is a joint responsibility. While SFA puts in place and enforces the regulatory measures, food operators must play their part by adhering to good food hygiene and preparation practices."

"Members of the public who come across any potentially errant food operator should report to SFA via the online feedback form. As part of the enquiry and gathering of evidence, SFA may engage the feedback provider for more details."

SFA also added that it will not hesitate to take enforcement action against errant food handlers if sufficient evidence is obtained.