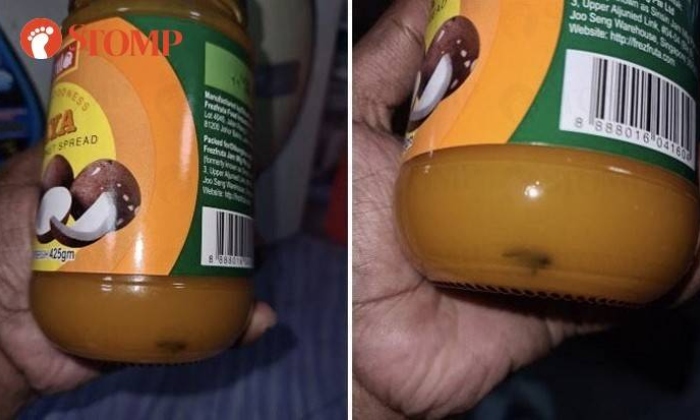 The Singapore Food Agency (SFA) is following up with the importer of Frezfruta after a Stomper found what he believed was a fly inside an unopened kaya jar.

Stomper Mohamed alerted Stomp to the incident on Tuesday (July 14).

He had purchased the jar of Frezfruta Kaya, Egg and Coconut Spread from Good Luck Provision Shop at Block 503 Jurong West Avenue 1 "one to two weeks" prior to alerting Stomp.

Mohamed said: "I'm utterly disgusted and shocked to find a foreign matter resembling a big fly inside the sealed jar.

"I'm also worried for others who have purchased the same food item.

In response to a Stomp query, an SFA spokesman said: "Food importers are required to ensure that the food products they import meet SFA’s food safety requirements.

"SFA has required the importer of Frezfruta Kaya Jar to look into this matter and we are following up with the importer."

Members of the public who come across any foreign matter in pre-packaged food products can report to SFA via the online feedback form, said the spokesman.