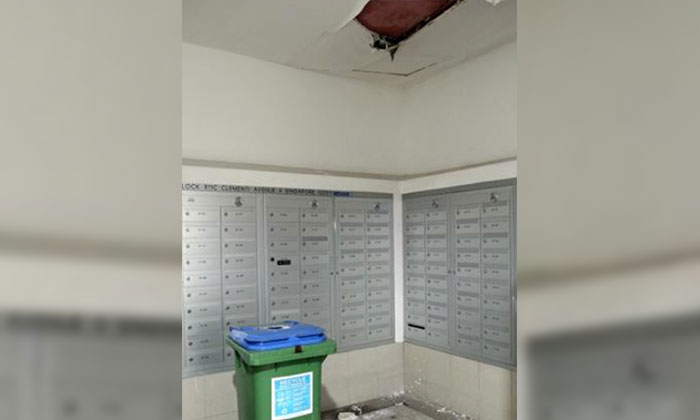 Mr Chen, 29, a resident who lives at Block 311C told Lianhe Wanbao that there was a pool of sewage water along the corridor.

“I was on leave on Tuesday. I saw a large pool of sewage water along the corridor at around 11am.

“The stench was overpowering. I almost vomited.”

A photo taken by a resident suggests that the sewage pipes had burst open, causing murky sewage water to pool below.

The pool was located not far away from a kindergarten where Mr Chen’s child was enrolled.

Mr Chen said that they had to leave via the kindergarten’s backdoor when he went to fetch his child at about 5pm on the same day.

Furthermore, Mr Chen said that he was shocked to see a section of the ground floor, including the letterboxes, cordoned off. A part of the ceiling was reportedly gone.

When reporters visited the scene, they found that the sewage water had been cleared, but there was still a lingering stench.

However, the cordon was still in place, leaving residents no way to retrieve their mail.

Reporters also observed that part of the ceiling above the letterboxes had been removed.

The paper was informed by an insider that members of the town council were seen removing part of the ceiling to inspect the pipes on Tuesday afternoon.

Hence, the missing part of the ceiling was not due to an accident.

Reporters also spoke to some 50 residents, and most of them were puzzled about the cordon as they did not know about the burst pipes.

“I heard that the sewage pipes burst. Other than the stench, we couldn’t open our letterboxes for the next two days. It was very inconvenient.”

In response to media queries, a spokesman from the Holland-Bukit Panjang Town Council said that investigations revealed damages to the sewage pipes on the 4th storey, causing part of the ceiling and lights along the corridor to be damaged as well.

The affected lightings have been removed.

The spokesman said that to investigate the cause of the leak, the authorities had to remove part of the ceiling.

Reparation works are expected to be completed by Aug 8.

“The workers removed the cordon this afternoon, and they will place up another cordon during the reparation works.

“We will also set up temporary lighting so it will be more convenient for residents.”

The spokesman also commented on the playground facility being cordoned off for nearly a year, saying that it was done to facilitate reparation works on the walls of the block.

“The town council will update residents periodically via Facebook, notices and other methods about the progress of the works.”