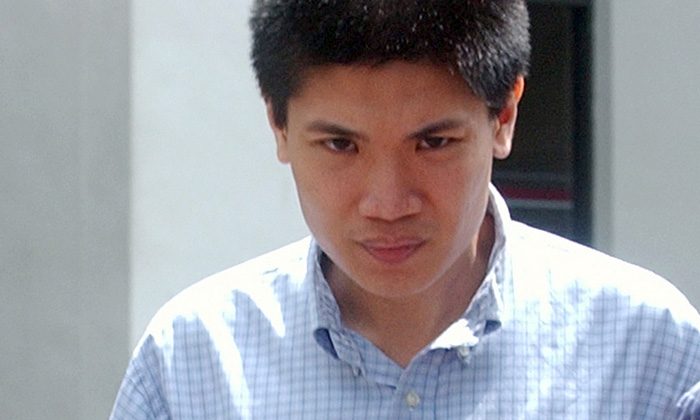 He was jailed and fined in 2013 for terrorising an American singer he had never met and harassing three other women, including two foreign singers.

But his time behind bars did nothing to deter Colin Mak Yew Loong, a Singaporean, from bombarding a Kazakhstani woman, 31, with text messages and e-mails after they met at a conference last November.

In a month, he sent her 278 WhatsApp messages, and between Nov 1 last year and July 29 this year, he sent her 62 harassing e-mails.

Mak, 44, also went to the woman's office in an academic institution four times in six months despite being aware that he was unwelcome, Deputy Public Prosecutor Sunil Nair told the court yesterday.

Mak was yesterday jailed for two months after pleading guilty to one count of unlawful stalking under the Protection from Harassment Act (Poha).

DPP Nair told District Judge Luke Tan: "The accused ought to have reasonably known that his acts would cause harassment to the victim."

Mak sent the woman 173 harassing messages on WhatsApp over a week from Nov 1 last year.

She replied only periodically, sending him 20 messages, and stopped altogether after he asked for her shoe size, which made her uncomfortable.

But he continued to send her messages until she blocked his number on Dec 1.

Mak's e-mails, however, continued to land in her inbox.

It is not clear what was in the e-mails and text messages.

In February, Mak showed up at her office and asked a person with an access pass to open the door for him.

He tried to give the victim a soft toy, but she rejected the gift. He left after she told him that she did not want to see him.

On July 1, Mak showed up again with a gift at her office. She again rejected him, and told him in an e-mail the next day she had never indicated interest in him, did not want a relationship with him, and was not comfortable with his behaviour.

On July 24, Mak returned and entered her office as the door was open for an event, and she again told him to leave.

Two days later he was back for the fourth time. The victim, who was not in, made a police report an hour later.

Mak was arrested on Aug 3.

Mak, who did not have a lawyer, yesterday asked Judge Tan for a lenient sentence.

He said he wanted to take full responsibility, and his e-mails to the woman were about politics and business collaborations.

"At no point have I ever threatened her," he added.

But Judge Tan said Mak's actions would have caused distress to the victim, and warned him not to get into trouble again.

"If ever you are charged for this offence again... you can expect a harsher sentence," the judge said, referring to what DPP Nair described as a long string of past offences.

In 2013, The New Paper reported that Mak was jailed for three years on 14 counts of criminal intimidation.

Ten of them were against US singer Leandra Ramm, who developed post-traumatic stress disorder and wrote a book about her experiences with him.

He also threatened the German boyfriend of a 30-year-old Hungarian music teacher he was cyber-stalking, and sent links to images of executions to a Singaporean businesswoman.

Mak was also fined $3,000 for harassing a 28-year-old Ukrainian musician after seeing her perform here.

He sent e-mails pestering her to go out on a date and shouted at her in a cafe at the Esplanade.

Ms Ramm told TNP in a 2013 Skype interview: "It didn't matter that he didn't meet me in person... It would have continued until he died or I died.

For unlawful stalking, Mak could have faced an enhanced penalty of a fine of up to $10,000, jail for up to two years, or both.

This was because of his previous conviction in December 2013 for intentional harassment under the Miscellaneous Offences (Public Order and Nuisance) Act.

Since 2014, the offence has been covered by Poha, which is designed to combat online harassment and cyber-bullying.