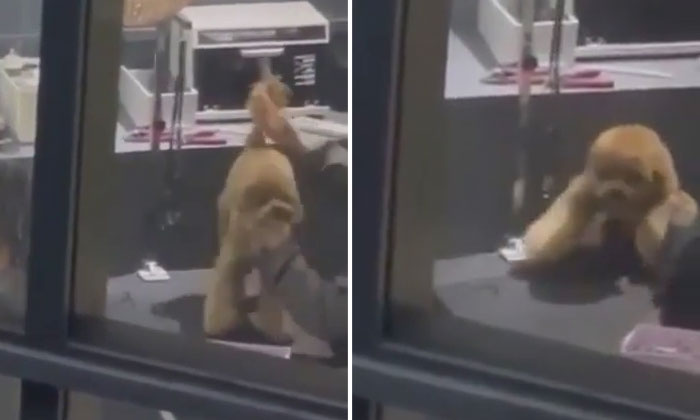 The authorities are investigating an incident of animal abuse at a pet grooming studio in Serangoon.

Two groomers were caught on video roughly handling a poodle while trying to give it a trim.

The video was reportedly taken by another dog owner on Saturday (Oct 23) and shared on Wake Up, Singapore's Instagram page on Sunday (Oct 24).

One of the groomers repeatedly yanked the dog's tail and grabbed it by the neck before shaking it aggressively.

She also let the dog fall off the table.

The Fur Room's owner, Victoria, addressed the incident via Instagram.

She said the poodle, referred to as "A", is a regular customer and that they "took for granted" how familiar they were with it.

"All these should not have happened and it was unprofessional of us to react in this manner," she said.

"It was a one-off negligence on our part and we should have been more patient and understanding towards A."

She has since reached out to A's owner to apologise and added that The Fur Room will fully cooperate with the Animal Veterinary Service (AVS) and its investigations.

In response to a Stomp query, Ms Jessica Kwok, group director of community animal management at NParks, said: "We take all feedback received from the public on animal cruelty seriously and are concerned about alleged case of animal mistreatment reported at The Fur Room pet grooming salon. We are looking into the case."

The Society for the Prevention of Cruelty to Animals (SPCA)'s executive director, Dr Jaipal Singh Gill told Stomp he has received numerous reports regarding the incident and that it is a "clear case of abuse".

"No animal should ever be handled in such a manner," he said.

"The case has been reported to the authorities who are currently investigating.

"The SPCA encourages pet guardians to send their pets to groomers who use humane and low-stress handling techniques.

"It is important to watch the grooming session and if you feel at all uncomfortable with how your pet is being treated, end the session and encourage your groomer to learn about humane handling.

"Such information is readily available these days and there are also courses that one can attend.

"If your groomer refuses to use humane methods, find another groomer.

"If there has been abuse, report the incident to the authorities."