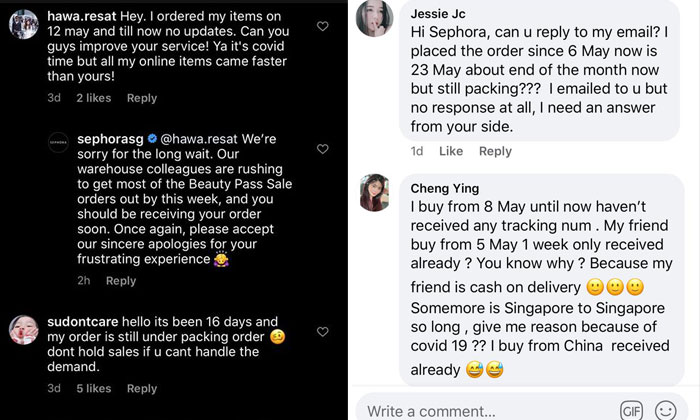 Sephora has responded to the delay in shipping out orders to its customers after weeks of waiting.

Stomper Kim and Debbie shared with Stomp their frustration and disappointment at not receiving items they had ordered via Sephora's website during the first two weeks of May.

Kim said she had placed her order on May 5 during Sephora's Beauty Pass Sale where items were going at 20 per cent off.

As of May 26, she had yet to receive her order.

"I sent two emails to enquire on my orders but got no reply.

"I also sent feedback and was told to wait another seven business days even though I have waited more than 20 days.

"On May 26, I received an email from Ninja Van saying that my parcel had been damaged in transit and that it was returned to Sephora."

She then received an apology email from Sephora saying the parcel was returned because they were unable to process a replacement as the order was under cash on delivery.

Debbie told Stomp she had bought hundreds of dollars worth of products from Sephora on May 10 and on May 25, realised nothing had been shipped out.

"Things I've bought way later had even arrived from China already," she said.

Both Stompers shared screenshots taken from Sephora's Facebook and Instagram of several other customers who had experienced similar issues.

In response to a Stomp query, a spokesman from Sephora said on May 29: "We recognise that the delay in delivery of Beauty Pass Sale orders, and those orders that followed, has been frustrating and disappointing to customers.

"The overwhelming orders volume, reduced warehouse teams because of safe distancing and recent restrictions from the extended Circuit Breaker were the case for delays in processing and preparation.

"But rest assured that our warehouse colleagues and delivery partners are working tirelessly to get most of the orders out this week.

"Affected customers should receive their parcels by next week.

"Since each customer matter is specific to what the customer ordered, when they ordered it and other factors that determine our ability to deliver on our customer promise, we would request to solve these issues directly with the customer.

"In addition, we are currently investigating concerns with our partners and vendors about damaged packages.

"Sephora is asking our delivery partner to return severely damaged packages to our warehouse, instead of providing to customers.

"For customers who received such packages, we recommend they reject the delivery.

"However if they discover something is damaged or missing, after accepting the delivery, then we ask that they contact customer service who will review and issue refunds upon receiving the product in question."