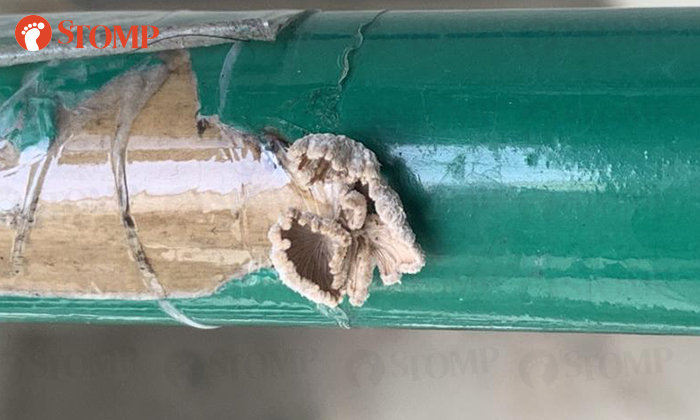 A Sengkang resident was worried after she found mushrooms on two of her bamboo poles on Wednesday afternoon (Dec 18).

Stomper Sammie, who lives at Block 311D Anchorvale Lane, contributed photos of the mushrooms and said: "It's been raining a lot recently so I have been drying my wet clothes indoors.

"Since I haven't been using the bamboo poles, I just leave them in the holders instead of bringing them into my flat.

"On Wednesday, I opened the windows and saw mushrooms sprouting out of two bamboo poles.

"I thought this looked quite awful and decided to take photos of them.

"When I shared the photos with my friends, they said that they saw the same thing on their bamboo poles as well.

"I change my bamboo poles once a year and these were purchased earlier this year in February.

"It's been about one week since I last used the bamboo poles to dry my laundry and now, I'm worried.

"I've been in Singapore for over 20 years and this is the first time I'm seeing such a thing.

"There's so much bacteria. What if it has been in the bamboo pole this whole time but was covered by the plastic surrounding it?

"I have a three-year-old daughter and I hang her clothes on these bamboo poles as well.

"As an adult, I won't care much about it but if I continue using these dirty poles, I would be worried about my daughter's health.

"I'm going to throw these bamboo poles and use stainless steel ones instead.

"The bamboo poles are still there. I'm waiting for the weekend to come by so that I can go purchase some stainless steel ones."