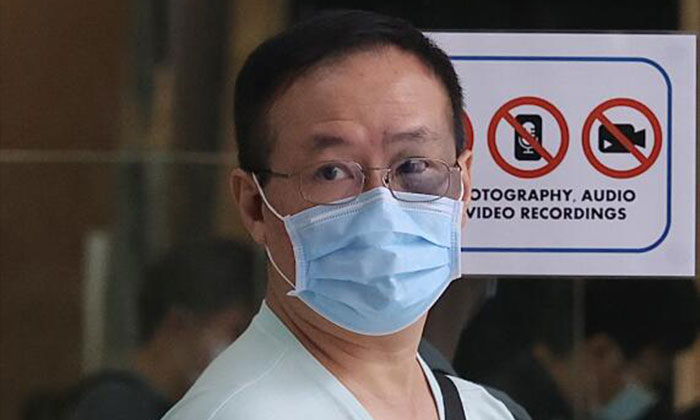 A 54-year-old man thought it would be fun to make the sounds of an explosion, so he improvised a matchstick explosive device and flicked it off his bedroom window.

The device exploded in a unit 10 floors below his flat on Aug 14 last year. No one was injured.

Ong Lam Wah was on Wednesday (June 22) convicted of committing a rash act that endangers human life. He faces another charge of threatening to bomb Sengkang Hospital, which will be considered for sentencing on July 21.

District Judge Toh Han Li called for Ong to be assessed for a day reporting order (DRO) and community service order (CSO) before sentencing him.

Under a DRO, an offender will have to report to a day reporting officer on a regular basis, such as once a week, and undergo rehabilitation for up to a year. A CSO requires an offender to perform community work for a period of up to 40 hours.

The court heard that Ong lived in a 16th-floor flat in Sengkang and was unemployed at the time.

The device he made was a box containing match heads which were taped together with striking strips. When the box strikes a surface, the match heads will ignite, creating a small explosion.

Mr Muhamad Yazin Hadi, who lives on the sixth floor of the same block, was praying at home when the device exploded behind him.

The 47-year-old heard a "bang" and jumped forward instinctively. A ringing sound in his ear lasted for several minutes.

When he recovered from his shock, he saw a green box and some black specks on the floor of his unit. There was also a smell similar to that of gunpowder and a faint layer of white smoke.

He then called the police.

Ong had admitted to flicking the devices off his window ledge on two earlier occasions - in June and July last year - but he did not hear them go off.

Deputy Public Prosecutor Tan Jing Min said he committed the acts late at night so he would not be seen by his neighbours.

She added that he had learnt to make the explosive device from online videos as he was interested in bombs and air guns.

"He wanted a cheap way to create a device that could make loud sounds and came across tutorials on how to construct an explosive device using matchsticks only," she said.

Police identified Ong as the culprit as he had previously threatened to bomb Sengkang Hospital.

His lawyer,  Mr Kevin Liew from Gloria James-Civetta & Co, told the court: "Following (his wife's) death on May 6 last year, he was upset when a nurse allegedly gave conflicting accounts about her death.

"He subsequently informed the medical social worker over the phone that he wanted to bomb the hospital out of frustration and anger."

Mr Liew added that his client had no intention of bombing the hospital or hurting anyone with the devices.

"(His actions) were precipitated by his grief of his wife passing away... He did not know the consequences of his actions, but he is fully cognisant of them now," he said.

The maximum penalty for committing a rash act that endangers life is a six-month jail term and a $2,500 fine.